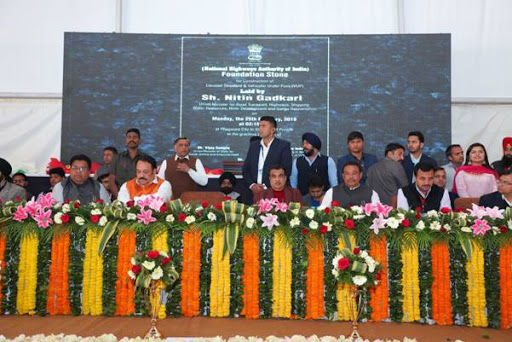 Union Minister for Road Transport & Highways, Shipping and Water Resources, River Development and Ganga Rejuvenation Shri Nitin Gadkari laid the foundation stone for an elevated structure and vehicular underpass (VUP) on NH-44 at Phagwara City in Kapurthala district of Punjab today. The length of this six lane project is 2.555 Kms, and approximate cost is Rs 165 crore. This project will bring safety and convenience to local road users. It will also reduce road accidents and pollution by easing road congestion.

Addressing a gathering at Phagwara on this occasion, Shri Nitin Gadkari said that corruption free, transparent and good quality work is the focus of his Ministry, and to get contracts for any road no one has to come to Delhi as the whole system is online. He said that projects worth Rs One lakh crore are underway in Punjab at present which include road projects of Rs 60 thousand crore and irrigation projects of Rs 40 thousand crore. Shri Gadkari said that the government is emphasizing on concrete roads as their life span is better. The Minister said, the elevated structure and vehicular underpass at Phagwara was a long pending demand of the people of the area, which has been fulfilled today. He said, work on the project will start next month and will be completed in a year’s time.

Shri Nitin Gadkari said that till year 2014 the length of National Highways in Punjab was 1739 kms. This has increased to 3,778 kms in 2018. He said, 21 big projects have been completed in the state between 2014 and the present, at a total cost of Rs 10,500 crore, under which 1,250 kms of NH have been constructed. The Minister said that work on 845 kms NH is underway at a  cost of Rs 13,400 crore and it will be completed by 2019-2020. He announced that under Setu Bhartam Yojna ten Railway Over Bridges will be constructed at Barnala, Nangal, Bathinda, Amritsar, Firozpur, Faridkot, Jalalabaad and Kotakapura.

Referring to stopping of India’s share of water of Ravi, Sutlej, Beas from flowing to Pakistan, Shri Nitin Gadkari said that the treaty in this regard between the two countries was based on mutual understanding, love and good relations. By supporting terrorism, Pakistan is not fulfilling this commitment. The government will not allow India’s share of water from the Eastern rivers to flow to Pakistan. Work is on to divert this water to Punjab, Haryana and Rajasthan, he added further.
Union Minister of state for Social Justice and Empowerment Shri Vijay Sampla thanked the Union Minister for execution of different roads and irrigation projects in Punjab. He said that it was a big hurdle on NH in this area which will be solved now after the completion of this elevated road in Phagwara City.

Punjab Public Works Minister Sh. Vijay Inder Singla also thanked Union Minister for laying foundation stone of this elevated road and said that there are about six such points on this NH which may also be completed. Rajya Sabha MP Shwait Malik was also present on this occasion.

Earlier, interacting with students at GNA University Phagwara, Union Minister Shri Nitin Gadkari emphasized on research in the area of bio-fuel. He said that students are future of nation and their innovations will definitely help the common people. Shri Nitin Gadkari said that government is emphasizing on Make in India-Made in India and every-one should take benefit from it.