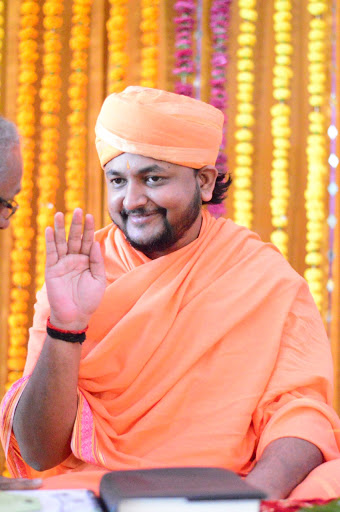 On late Friday evening, Maharishi Mahamana Acharya Shri Kushagranandiji's ardent follower Urjaa Guru Arihant Rishiji reached Sawai Madhopur, in Rajasthan. While addressing the reporters, he strongly criticized Alwar gang rape case. He expressed his rage and disappointment on the negligence of the police officials and also reproached the founder of Karni sena and Bheem sena, Chandra Sekhar Ravan. Urjaa guru Arihant Rishiji said that the victim of Alwar gang rape case must be given justice at all cost.

Answering the reporters, Urjaa guru Arihant Rishiji said that, " Even after 15 days of this barbaric incident, the officials are unable to take any proper action which strongly arises the questions on the safety and security of the women in this state. Groups like Karni sena who had previously protested against Padmavati movie in the name of protecting the glory of rani Padmini has been silent on this entire debacle, when a woman is abused on their own land. Where is Bheem sena who thinks themselves as society's saviors? Today when a dalit family is abused and assaulted, everyone has taken to silence. It is not wrong to say that in the proud land of warriors, the Mughals are still ruling and the women are continuously facing harassments like rape, acid attacks, dowry deaths etc.

It should be noted that, Urja guru Arihant Rishi has been in news recently for his controversial statements on Chandra Sekhar Ravan, the founder of Bheem sena and CM of West Bengal, Mamta Banerjee. He had displayed his rage when a parade was stopped in the occasion of Ram Navami in Kolkata. He said that " those doing politics in the name of Ram are wrong and Mamta Banerjee who tried to stop the parade of Shri Ram is actually the Raavan of this century. According to him, our country needs such type of young people who would talk about Ram. Who would dream of establishing Ramrajya and would take possible measures for making it happen. But those who think of themselves as mahatma but walk on the path of Ravan's, should keep it in mind that there is no existence of Ravan and Shri Ram is such a Mahapurush who is widely known in all over the world.