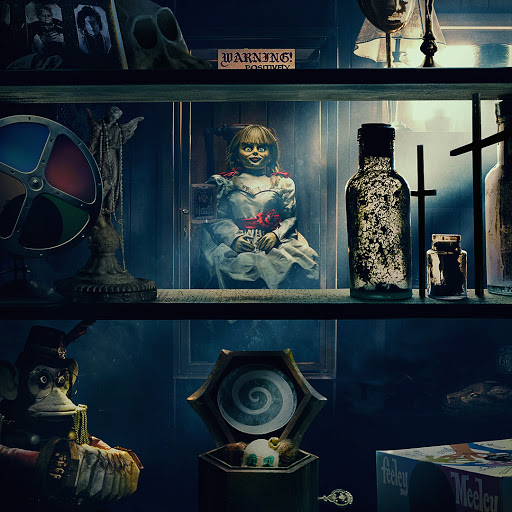 Get ready to be scared out of your seats on June 28 as the sinister doll from the Conjuring universe is all set to return to the big screen with "Annabelle Comes Home”. This is the third installment of New Line Cinema's hugely successful “Annabelle” films which will be released pan India by Warner Bros Pictures in English Hindi Tamil and Telugu. Gary Dauberman, the screenwriter of the “Annabelle” films, “IT” and the upcoming “IT Chapter Two,” and “The Nun,” makes his directorial debut on the film, which is produced by Aquaman producer Peter Safran who has produced all the films in the “Conjuring” franchise, along with “Conjuring” universe creator James Wan who has produced the last five film's under his Atomic Monster banner.

The story on this Annabelle outing has  demonologists Ed and Lorraine Warren bring the possessed doll to the locked artifacts room in their home, placing her “safely” behind sacred glass and enlisting a priest's holy blessing inorder to keep Annabelle from wreaking more havoc. But, a year later, an unholy night of horror awaits the Warrens' ten-year-old daughter, Judy, and her friends after a visit to the room awakens Annabelle...and all the evil spirits residing there.

Patrick Wilson, who returns in the role of Ed Warren, says he and co-star Vera Farmiga “love playing these roles because we know we're going to get to do some high drama with some high level scares, dealing with some pretty dark things, but also find all those moments to show that other side to this couple.  In this film especially, our part is largely that of loving parents to Judy.”

Alongside Wilson, Farmiga steps into the role of Lorraine Warren for the fourth time and adds that much of what attracts her to these stories is “the purity of their love and how connected they are, how they balance each other.  That, as well as the idea of their faith being such a strong force for them, is in such stark contrast to the darkness they encounter.”

Talking about working once again with Patrick, Farmiga says that no matter the seriousness of the scene they are shooting, “I love the amount of smiles that Patrick doles out on a daily basis. once I timed him just to see, and in the span of 60 seconds he smiled at least 15 times.” Farmiga adds, “Patrick is wonderful, and we have such a good time. And after all of these films together, he's like family.  Like my goofball cousin.”

Both actors feel it helps not to approach the work on these films as if it's a horror movie, because they are portraying a couple who really lived it and handled it with such intelligence and grace.  “I think of these not as a genre story, but as a love story, and I think that's why it works for us.”