The Second All India Annual Conference of Indian Information Service Officers was organized at Pravasi Bhartiya Kendra in New Delhi today. The Conference was organized with a view to attaining greater integration of all Media Units under the Ministry of Information & Broadcasting in order to further amplify government communication.

The conference included sessions on Adoption of Integrated and Theme Based Communication Approach; Regional Expansion of Social Media and use of Integrated Dashboard; Adoption of Government Communication Impact Assessment Framework; Roadmap for celebration of 550th Anniversary of Guru Nanak, 150th Anniversary of Mahatma Gandhi, 75 Years of India's Independence and Golden Jubilee Edition of International Film Festival of India. A Performance Review of Media Units under the Ministry of Information & Broadcasting was also conducted during the Conference.

Union Minister Shri Prakash Javadekar conveyed his message to the Delegates of the Conference wherein he highlighted the importance of feedback along with communicating the programs and policies of the government, stating that the IIS Officers are the eyes and ears of the government. He urged them to avoid working in silos and instead adopt a unified approach to communication through working in tandem with officers of sister Media Units of the Ministry. He suggested forging relations with institutions of Mass Communication and utilizing the talent pool available through internship programs to harness the imagination of youngsters in making government communication more interesting and in tune with the changing demands. 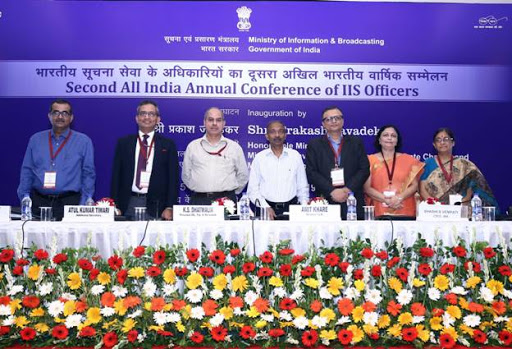 Speaking in the inaugural session, I&B Secretary Shri Amit Khare said that there is a necessity to shift government communication from segregated Ministry-wise approach to a holistic, thematic approach, which is citizen-centric in nature. He stressed on the importance of adoption of participatory communication approach to ensure pro-active involvement of citizens, especially those who are beneficiaries of government schemes. He also said that the IIS Officers need to push for greater adoption of digital outlook in communication, giving the example of exploring the possibility of issuing media releases with short embedded videos instead of press releases.

The Conference was attended by Senior IIS Officers from all across the country, along with officials of the Ministry of Information & Broadcasting, Prasar Bharati and Indian Institute of Mass Communication.