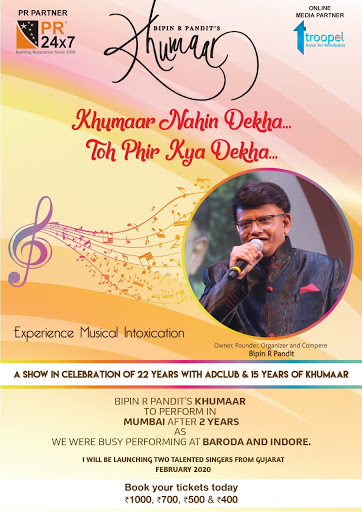 It was way back in 1998 that I decided to quit Castrol and join The Advertising Club. It had something to do with my innate abilities of being a good organizer, strong networking skills, urge to do new things, accept challenges, affinity towards language and communication and above all genuine love for people. My 22 years with The Advertising Club has been a truly enriching and fantastic journey. I have had the privilege and distinction to work with the best and most reputed professionals of the industry; be it the President or Managing Committee Members all are stalwarts in their own right.

I'm also extremely happy that by God's Grace, I continue to contribute in my own way towards the success of The Advertising Club.

My Stage Career had begun since the late 80s much ahead of joining The Advertising Club. Today, its very comforting and satisfying to know that I have put in 34 years on stage either as a professional compere or impersonation artist having worked with best banners all over Maharashtra and many other places.

As Khumaar continues to enthrall a large number of audience, I started harboring a dream of making it a National Brand. Thus, Khumaar was organized in Baroda and Indore with huge success and I'm sure there will be many other cities that will be covered. Today, I take a lot of pride in stating that Khumaar is truly a National Brand as its artists are not only from Mumbai but from Baroda, Ahmedabad, Pune, Indore, etc. It is truly heart warming when hopefuls call me from various places asking to give them a break in Khumaar. Many a singers come home and give auditions.

I take a lot of delight and honour in stating that Singers like Suresh Wadkar and Ghulam Abbas Khan have sung for Khumaar in the past. Playback Singer Roop Kumar Rathod and Sonali Rathod have been guests at a show of Khumaar. My first coffee table book titled Khumaar was launched by Pyarelalji and Prasoon Joshi.

It is a matter of great pride that Khumaar has launched singers like Shrinidhi Ghatate who is a playback singer today and sings for Ehsaan Shankar & Loy.  She is hailed as the Shreya Ghoshal of the future. Add to this other names like Rudraksh Goyal (Mumbai), Rajeshwar Karmakonda (Mumbai), Javed Khan Kalawant (Mumbai), Dhanashree Padhye (Baroda) & Chirag Desai (Ahmedabad).

The next show is in celebration of my 22 years of association with The Advertising Club and completion of 15 years of Khumaar through a Musical Nite to be held in the month of February 2020 most probably at Ravindra Natya Mandir, Prabhadevi.

I'm planning to associate with a social cause promoted by a reputed NGO. The entry to the show will be through sale of donor passes.