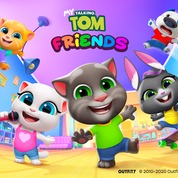 New Delhi, June 18, 2020: Outfit7 Limited today announced the launch of its new virtual pet game My Talking Tom Friends, now available to download worldwide on iOS and Android. The eagerly awaited new game from the award-winning Talking Tom and Friends franchise brings a never-before-seen approach to the genre, uniting all six iconic characters in a play-as-you-want sandbox experience. Fans around the world couldn't wait to play the revolutionary new game, with 13 million pre-registering before the launch – a record-breaking achievement for the company.

“With My Talking Tom Friends, our goal was to take the popular virtual pet genre and reinvent it. We wanted to go far out and deliver something that sweeps people off their feet,” said Xinyu Qian, CEO of Outfit7.

“For the first time ever, we created an environment where our fans can play with not one, but multiple characters at the same time – in whatever ways they choose! This offers a practically limitless array of possibilities, providing a unique playing experience for each and every user. We are all very excited to see what will become of it in the hands of our fans.” 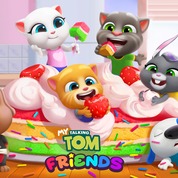 With Talking Becca – the newest addition to the franchise – joining Talking Tom, Talking Angela, Talking Hank, Talking Ben, and Talking Ginger, players can now tend to the needs and wishes of all six characters at once, and help them live their fascinating lives.

The friends are dynamic, moving around the open, scrollable house, looking for ways to have fun. Players can engage with them and take part in fun activities like cooking, painting, gardening, and socializing. There’s also a suite of brand new, action-packed mini-games to discover. Impressive interactive options allow fans to explore and customize the vivid, beautifully-designed virtual world at will.

For the chance to create your own unique stories of friendship and fun, download My Talking Tom Friends for free from Google Play and App Store.

Outfit7 Limited is one of the world’s fastest-growing multinational family entertainment companies. The company is best known for its flagship franchise, Talking Tom and Friends, which became an overnight global sensation when it launched in 2010. In the years since, Outfit7 has expanded its portfolio to include a suite of award-winning games, a 3D CGI animated series, video content and a licensing program in order to meet the amazing demand of its fans. Outfit7’s games have now been downloaded over 13 billion times in total and up to 410 million fans play with them every month