28th July 2020, National: Prabha Khaitan Foundation, an organization that is dedicated to the socio-cultural welfare and humanitarian cause, organized a virtual session of their flagship initiative, An Author’s Afternoon today. The session witnessed a captivating conversation between renowned author, Kavita Kané and distinguished entrepreneur Swati Gautam. An Author’s Afternoon has been hosting a successful series of enchanting afternoons that involve deep conversations with authors who have a story to share, the venture has become popular for its classy gatherings. Since the first ever event the concept gained acceptance among the audience and became a platform for writers to share their life and works. Passionate about theatre, cinema and art, Kavita is a bestselling author, columnist, a screenplay writer and a motivational speaker having given several talks across the country’s educational and research institutes, corporate and management fora and literary festivals. 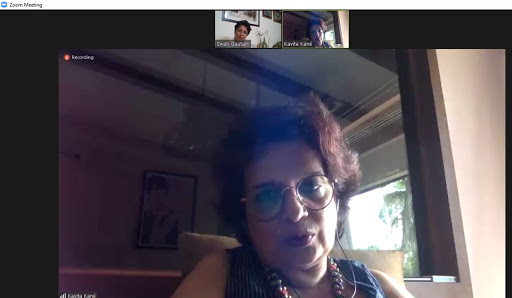 Speaking on the virtual session, Ms Manisha Jain, Communications & Branding Chief, Prabha Khaitan Foundation, added, “Prabha Khaitan Foundation is committed to engage communities in promoting knowledge, art and culture. Through our initiative, An Author’s Afternoon, we have always endeavoured to celebrate authors and their literary works through engrossing discussions. We may be mostly locked up at home, but literature and books are something that can become a solace during these grim times. We are optimistic that by taking our initiatives on a virtual platform, we will be able to brighten up these rather dark moments by serving our audience some food for thought.”

Kavita Kané is the bestselling author of six novels and today, she is considered a revolutionary force in Indian writing mainly because she has brought in feminism in where it is most needed - mythology. All her six novels, are based on lesser known women in Indian mythology - Karna’s Wife(2013); Sita’s Sister(2014), Menaka’s Choice(2015) Lanka’s Princess(2016), The FisherQueen’s Dynasty(2017) and the latest one Ahalya’s Awakening. For one who confesses that the only skill she knows is writing, her word journey expectedly, began as a journalist. With over two decades in journalism, she eventually quit her day job to pursue a career in writing full-time.

The conversation focused on all the works of Kavita Kané’s - from Karna’s Wife to Ahalya’s Awakening. She breathes new life into these age-old stories and characters and gives them a new perspective. The author iterated what inspired her to create these characters and her ideas behind the stories. She took the audience on a short yet crisp journey through all her books and delved into each story. From Urmila’s maturity in Sita’s Sister to creating a fictional Uruvi in Karna’s Wife to give the best perspective of an unsung hero, from the science of seduction in Menaka’s Choice to the insecurities of Surpanakha in Lanka’s Princess – the hour was filled with thought provoking notions on these immortal characters and a fresh point of view on these epics.

During the session, Kavita Kané emphasized, “The various versions of our epics show their dynamism. This has helped them exist for thousands of years. It gives us the liberty to change our views and think differently. While these women have mostly taken a backseat throughout our mythologies, one cannot deny their significance in taking the story forward. These characters were ahead of their time and are the ones that resonate the most with women even today. However, to know our mythology in the best way possible, one must go back to the originals.”

Speaking on the works of Kavita Kané and An Author's Afternoon Ms Swati Gautam, stated, “Kavita’s works have always embraced womanhood and it is an absolute inspiration to everyone. They have helped us appreciate our mythology better. I would also like to congratulate Prabha Khaitan Foundation for seamlessly taking a unique concept from the physical to virtual platform. An Author’s Afternoon is truly a commendable initiative.”

Prabha Khaitan Foundation’s vision to promote and recognise talent from different walks of life has led them to arrange immaculately curated literary sessions in about 30 cities across the country. Encouraged by the response in India, the Foundation has also forayed into the global arena with a bouquet of sessions. They have hosted some of the greatest stalwarts from the world of words, even as they are focused on creating a platform for aspiring talent. An Author’s Afternoon started its literary journey in the summer of 2012, has come a long way in celebrating people and their beloved styles of literature. An initiative for the love of literature, by the lovers of literature, An Author's Afternoon is now a prized possession. Through An Author’s Afternoon, Prabha Khaitan Foundation has hosted celebrated writers like Jeffrey Archer, Joshua Pollock, Amish Tripathi, Javed Akhtar, Anuja Chauhan, Ashwin Sanghi, Arunava Sinha to name a few.

About Prabha Khaitan Foundation: Prabha Khaitan Foundation is dedicated to the socio-cultural welfare and humanitarian cause. It is a non-profit trust founded by Late Dr. Prabha Khaitan. Based in Kolkata, the Foundation promotes performing arts, culture and literature, and collaborates with caregivers, committed individuals and like-minded institutions to implement cultural, educational, literary and social welfare projects in India. The Foundation supports the UNESCO view that cultural development has the potential to be an alternative way of promoting sustainable development in poor rural communities, especially in the third-world countries. Based in Kolkata, for them culture stands for language, music, literature, visual arts, dance, drama, oral traditions, and traditional practices. The objective of the foundation is to create an enabling structure and promote networking so that communities engage with each other to work towards building positive self-esteem, inspire creativity and pro- mote culture and knowledge.

INFRARED LASER THERAPY 101: EVERYTHING YOU NEED TO KNOW

January 19, 2021
Infrared light is such a powerful technology that it is used in many, many therapies to heal. A big form of laser therapy that we’re fans of: treating chronic pain.  According to the National Institute of Health, pain is the most common reason for physician consultation in the United States. Approximately one out of three Americans is affected by chronic pain annually.  How crazy is it that we’re all living with some level of chronic pain? It’s so common to reach for ibuprofen after that hard workout or to think you can just live with a few chronic aches. We’ve all been there, right? But, there’s a natural, effective way to promote healing: laser therapy.  Laser therapy, sometimes known as cold laser therapy, low-level laser therapy, or near-infrared therapy, is growing in popularity as a low-risk, effective way to treat pain. Light therapy has been shown over the course of 40 years to reduce inflammation, induce analgesia (pain relief), and promote healing.  Laser therapy uses the sa
Read more