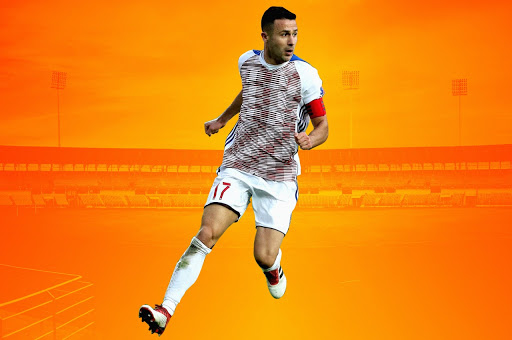 Goa, July 22, 2020: FC Goa is pleased to announce the signing of Spanish forward Igor Angulo. Hailing from the Basque region in Spain, the striker penned a one-year contract with the Gaurs.

The experienced striker has spent the past 4 seasons in Poland with Gornik Zabrze, where he has been amongst the top 2 goal-scorers in the Polish Ekstraklasa for three consecutive seasons, winning the Golden Boot in the 2018/19 season thanks to his 24 strikes. The Bilbao native has scored a total of 88 goals in 154 games during his time in Poland. He has also notched up a further 21 assists to take his total goal contributions’ tally up to 109 over the four years spent with the record 14-time Polish Champions.

The forward led the charge in Górnik Zabrze’s promotion to the Polish first division in his first season at the club and has since helped establish them as a regular in the Ekstraklasa. He has been their highest goal scorer in each of the seasons he has been there.

Speaking after completing his move, Angulo stated, “I am excited at the prospect of playing for FC Goa and it is an adventure that I am keen to start at the earliest.

“What attracted me to the club was that I liked the way of playing, the philosophy. FC Goa is one club that is always on the attack and in doing so, are able to create a beautiful style of football.

“Another big thing that stood out is I like the mentality of the club. It’s filled with winners, always fighting for the biggest honours. And that’s what I want to do when I come in.”

FC Goa’s Director of Football, Ravi Puskur sounded pleased after the Angulo signing. Speaking on the same, he stated, “We’re excited to bring Igor on board to FC Goa. He’s a proven, serial goal-scorer with experience across multiple countries in Europe and we’re confident he will prove an ideal fit for our style of football.

“Igor’s natural goal scoring ability was a clear standout when we first looked at him, but his leadership prowess and competitive nature with a strong desire to win is something we feel will add immense value to our dressing room.

“His time in Gornik has made him a legend and a household name in Polish football and we hope that he will have a similar impact for FC Goa and its fans."

Starting off his career with Athletic Bilbao, the 36-year-old has gone on to play for Numancia, Gimnàstic de Tarragona and Real Union in Spain. Outside his home country, he has appeared for French side AS Cannes before spending his time in Greece and Cyprus. A move to Poland materialised in 2016.

The Spaniard joins Redeem Tlang, Sanson Pereira and Makan Winkle Chothe in the list of players signing in favour of the Gaurs this off-season. The forward is also FC Goa’s first foreign capture. The club also extended the contracts of Lenny Rodrigues and Edu Bedia in addition to promoting promising right-back Leander D’Cunha to the senior team.