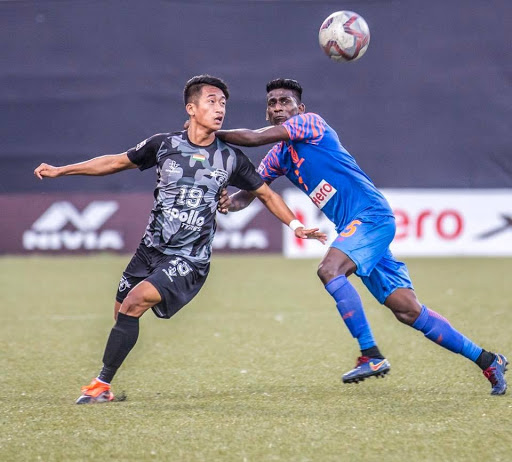 ~ The young Manipuri penned a three-year deal with FC Goa ~

Goa, July , 2020: Makan Winkle Chothe has taken the Indian footballing fraternity by storm over the last three years. The winger, who never had a formal training background until selected by Minerva through a trial in 2017, has over the last few seasons impressed all and sundry with his brilliance on the wings.

Within the space of the last three seasons, the 20-year-old Manipuri has gone on to lift the Hero Elite Youth League, score in the I-League and play on the continental stage for his club.

This, however, is just the beginning of the road for the youngster, reckons he himself. Chothe has set his sights even higher.

“I was surprised, you can say ecstatic. It didn’t take much to convince me either,” says the ever-gleeful Makan Winkle Chothe after penning a three-year contract with FC Goa. “I didn’t want to tell anyone. I didn’t even tell my parents that FC Goa wanted to sign me. They only got to know after all the paperwork was finished. I am thrilled.”

Chothe’s signing represents the Gaurs’ 3rd new capture of the season, following the arrivals of Redeem Tlang and Sanson Pereira. The move also magnifies the club’s methodology of finding young talents across the country and giving them a platform to shine on.

It was only a few years ago that the name of Makan Winkle Chothe was unknown to both fans as well as scouts alike. In fact, it was a social media post in 2017 that changed the life of the 20-year-old.

“I had never been formally educated in training. In my village in Purum Chumbang in Manipur, I used to play the game after school and during holidays. The game came quite naturally to me,” remarks Chothe, looking back.

Having completed his Class 10 exams, the then teenager made a move to Siliguri in West Bengal, where he joined a club called Kanchenjunga FC. His stay there, though, was short lived.

“It was a post on Facebook. Minerva Academy was having trials for their team and I convinced my uncle to get me to Punjab,” recalls Chothe. “I had real faith in my abilities, and I really wanted to give this a try.”

The rest, as they say, is history.

The coaches in Minerva knew that they had a talent on their hands and quickly snapped him up.

In his very first season, Makan shined, scoring 35 goals in just 13 games for Minerva as they clinched the national crown in the tournament organised by Reliance Foundation Youth Sports.

One season later, he would again prove to be the talisman as Minerva became champions of the Hero Elite League. By then, Makan had already been drafted into their senior set-up with his debut coming at the fag end of the 2017/18 season when he came on as a last-minute substitute.

He would have a more telling impact on the I-League a season later, featuring 11 times for the Minerva in 2018/19 season.

Speaking on his steep rise up the club ladder, the Cristiano Ronaldo fan stated, “I feel it’s a result of hard work and the belief that my coaches and peers have had in me. I started doing well in the youth tournaments, but I was never satisfied with them and wanted to make a mark at the senior level.

“I was able to do that last season, and now with this move, I feel I have the opportunity to take the next step. I get a chance to play with the best in the country as well as against them now.

“I want to give my best for FC Goa and make it to the national team as soon as possible.”