~ The Spaniard adds grit, guile and flair to the FC Goa midfield ~

Goa, September, 2020: Self-belief is something that goes a long way to determine whether a player will be successful or not. Whether he 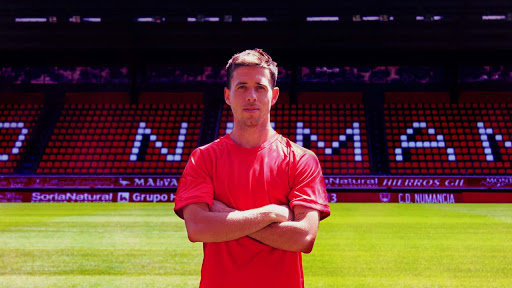 can truly make a mark. The questions of whether he can integrate himself into new schemes or plans and be able to take on new challenges ahead are marked by the ability to convince oneself.

And new Gaur Alberto Noguera has no lack of confidence when it comes to questions about his own abilities and promises to give it all for Orange of FC Goa when he takes to the pitch.

Speaking to fcgoa.in after putting pen to paper on a two-year contract the 30-year-old said, “Very excited to join the club. I can’t wait to play again. It will be a very nice challenge.

“I know that people will expect big things because this is what FC Goa is all about. We were winners of the league last year and this year, the target remains the same. I would even say, we would like to go one better and win it all. I wouldn’t be here if the challenge wasn’t so great.

“I don’t feel there is any pressure on me because I know the player I am and what I am capable of. We will have to put in a lot of work and effort, that is for sure. However, I am certain with the quality of players we have and more importantly the mentality of the players, it will be a great year for the team and me.”

It’s not always an easy choice for someone to leave the Spanish shores to set sail to India and Goa. However, the project and a conversation with a former Gaur seems to have convinced him that joining the defending champions of the ISL League Winners Shield was the best decision for him.

“Coming to Goa to play would be like adding a new string to my bow. I am sure it will be a great experience. I have always been attracted to the possibility of coming to Asia and I didn’t have to think too much when this opportunity presented itself. It is an honour for me.

“The people of the club, their vision, their professional approach and their interest in me was what made me take it up.

“I already know and have played with a few players already in the team and I don’t think it will take me much time to acclimate to the team and the conditions.”

With the COVID19 pandemic still rearing its ugly head into our daily lives, this year will see the league being played entirely in Goa and behind closed doors.

Speaking on the situation, the Spaniard further remarked, “Firstly, I think COVID can’t stop our lives. We have to be cautious and use our best judgment and take things in stride. We can’t be afraid to live.”

The Spaniard also had words for the FC Goa faithful ahead of the new season.

“To the fans, I would like to say that I promise to put in our best effort. We will all work hard and collectively for our goals. That is the most important thing. And I will always have that in mind. The rest, let’s see,” Noguera added.

“I am very grateful to be part of this club. I hope to see you soon and that we celebrate many things together.”