*6th World Parliament of Science, Religion and Philosophy 2020 concludes with Declaration of The Dalai Lama Chair* 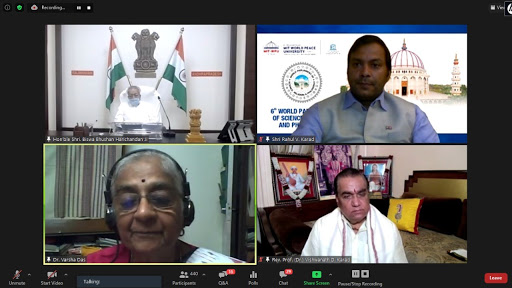 October 04, 2020: The 6th World Parliament of Science, Religion and Philosophy 2020, held from 2nd October 2020 to 4th October 2020, was successfully concluded with global leaders appealing to the youth for world peace and spreading harmony and positivity during the times of the pandemic. The virtual summit culminated with the declaration of The Dalai Lama Chair, hosted by MIT World Peace University (MIT-WPU) at the backdrop of the World Peace Dome along with an engaging discussion on the importance of Indic Studies/The Dalai Lama Studies for Future Of World Peace, which was the key highlight of the day.

The three-day summit was a great success and saw a host of attendees and stalwarts addressing global issues, such as the need for the eradication of Biological and Chemical Weapons, Climate Change - Impact on World Peace, amongst others. Another prominent issue, which was highlighted was that of COVID-19, which seems to have an impact on the entire world, creating chaos in the society. The conference also witnessed participation from across the world, making it an International platform for all global citizens.

The three-day virtual summit highlighted the importance of amalgamation of Science, Religion and Philosophy as the most important source for mankind. The leaders also focussed on the key elements to creating a successful interfaith movement like acceptance to multiple paths to the divine, relieving suffering, honouring gender equality, and nurturing and protecting the natural environment.

Key conclusions like the importance of unification of Science and Spirituality to save mankind, the knowledge of how to live life through spirituality, dire need to evolve and promote a value-based universal education system, a strong belief in peace and harmony through the preaching of ancient Indian wisdom, such as, ‘Vasudhaiva Kutumbakam’ (The World is one family) and the need to imbibe Gandhi’s ideals again in this current turbulent world, were sent to the entire humanity through the platform of the 6th World Parliament of Science, Religion and Philosophy 2020.

Speaking on the conclusion, Prof. Dr. Vishwanath D. Karad, UNESCO Chair Holder, Founder, MIT World Peace University, Pune, said, “There is a dire need to evolve and promote a Value-Based Universal Education System with a congruous understanding of the role of Science and Spirituality/Religion to minimize the global pandemic, confusion, violence, terrorism, massacre and atmosphere of suspicion prevailing in the world. Through the 6th virtual summit, I hope that we’ve been successful in propagating the law of peace and awakening the youth to this message.”

Shri Rahul V. Karad, Secretary, Organizing Committee Managing Trustee & Executive President, MAEER’S, MIT Pune, Executive President, MIT-WPU, said, “The COVID-19 has profoundly affected our society and has universally disturbed the peace and security across the globe. With the pandemic hampering our mundane lives, it is imperative to stand strong and fight together. With each year of organising the summit, we deliberately invite global leaders across various fields, to provide a platform to the youth to have a more holistic approach towards the society and create a framework for a peaceful and a better world.”

Addressing as the Chief Guest at the valedictory session of the summit, Shri Biswa Bhusan Harichandan, the Hon’ble Governor of Andhra Pradesh, said, “The solution to many problems faced by humanity lies within the age-old Indian tradition of 'Vasudaiva Kutumbakam' – the world is one family. The COVID-19 pandemic has created difficult times for the entire humanity and posed a challenging situation for the world as the fight is being waged against an invisible enemy and the battle can only be won when the whole world stands united to find an everlasting solution to end the menace.”

Shri Pema Khandu, Hon'ble Chief Minister of Arunachal Pradesh, said, “I congratulate MIT World Peace University on the occasion of the declaration of The Dalai Lama Chair and for spreading the culture of peace and welfare among the youth.”

Shri Sanjay Dhotre, Minister of State Human Resource Development, Electronics, Information Technology and Communications, Government of India, shared his views on the topic, 'India will become a Vishwaguru in 21st century – A Roadmap’ and touched on the National Education Policy 2020, “Quality education is the bedrock of nation-building. It is central to creating a strong foundation for our future generations. India will have the highest population of youth in the next few decades and our ability to provide a higher quality of education to them will determine the future of our country. Keeping this vision, we have brought out the truly transformational National Education Policy 2020, the first education policy that aims to address the growing developmental imperatives of our country.”

the 6th World Parliament of Science, Religion and Philosophy. In the current times of the global

crisis of the pandemic, there couldn’t have been a better time to convene such a conference that deliberates on how to establish peace globally.”

Hon'ble Shri. V. Muraleedharan Ji, Minister of State for External Affairs, Government of India, New Delhi, spoke about the National Education Policy, and said, “The education system that India inherited after freedom has outlived its utility. Under the leadership of our Prime Minister, Shri Narendra Modi, the National Education Policy is nothing short of a revolution in enhancing the freedom of choice especially in higher education while standing true to Indian ethos.”

This discussion witnessed the presence of: