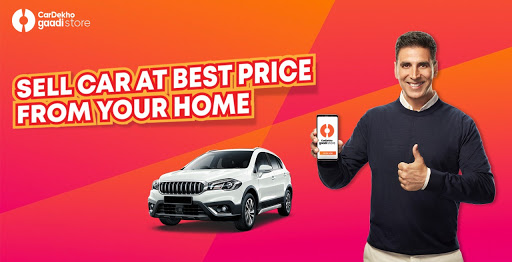 New Delhi, November 11, 2020: CarDekho, India’s leading full-stack auto tech-company, today launched a new TVC with Cine- superstar Akshay Kumar. The TVC highlights the easiest way of selling a used car to CarDekho Gaadi from anywhere be it home or office. This festive season the company has launched its campaign ‘Karo India Forward, Karo Gaadi Forward’ with Rahul Dravid, Mahesh Babu and Akshay Kumar who is the latest celebrity to join the campaign.

The TVC shows how an entrepreneur (Akshay Kumar) finds a new way to run his business, ensuring his staff’s job security as well as safety, thanks to the CarDekho App. The film focuses on a family owned Irani Café that is hit hard by the pandemic, with no customers and no sales. The owner sees the falling morale of his employees, as they fear losing their jobs. He hits upon a win-win solution - he sells his car on CarDekho Gaadi and uses the money to buy delivery scooters. Thus, his business moves forward by being able to start home delivery and his wait staff get to secure their jobs by now becoming the delivery guys as well.

In past months, the company has seen a surge in customer interest to buy and sell their car. The festival season has given a chance for people to cheer and move on in life, depicted by the brand in its latest campaign. CarDekho Gaadi’s Pre-owned car business has seen a significant jump as more and more customers are opting for personal mobility solutions over public mobility.

CarDekho has successfully digitized the auto ecosystem in India and is aggressively pursuing its vision to own the personal mobility space by helping customers across their entire car purchase, ownership and sale journey.

The campaign has been created by Leo Burnett and will be released across national and regional television channels and digital publications.

Commenting on the announcement, Mr Gaurav Mehta, Chief Marketing Officer, CarDekho, said, “The objective of our campaign is to showcase the convenience brought by CarDekho Gaadi in helping people sell their cars from the comfort of their home or any other place. Akshay Kumar is one of the best-known faces of the country’s cinema industry. His hardworking personality fits well with CarDekho’s brand integrity and sincerity. Also, dedicated to the cause of making the world a better place he truly represents CarDekho’s thoughts and will bring forth us as a trusted brand the nation can rely on”.

Talking about his association with CarDekho, Akshay Kumar said, “I am delighted to be associated with CarDekho, a brand working aggressively in redefining the entire auto ecosystem and personal mobility space of the country. CarDekho Gaadi is an excellent business aimed to ease the complex used car selling process for the customers.”

CarDekho Group, headquartered in Jaipur, was founded in 2008 and has footprints in India, Indonesia and the Philippines. The group currently operates various leading Indian auto portals such as CarDekho.com, Gaadi.com, ZigWheels.com, BikeDekho.com, PowerDrift.com and more. Its CarDekho Gaadi stores serve as the one-stop destination for customers to sell pre-owned cars and CarDekho Gaadi Trust Mark Stores serve as the one-stop destination for customers to buy pre-owned cars. The group is now recognized in India as the largest automotive video content player with 2 million+ YouTube subscribers, the largest consumer-facing digital destination with 41 million monthly unique visitors, and the largest auto social media platform. In 2016, the company expanded its presence in Indonesia under the brand name OTO, which has become the number one auto site in the country. It recently acquired the Philippines operations of Carmudi thereby expanding its operations to two Southeast Asian countries. CarDekho has raised funding from marquee investors including Sequoia India, Hillhouse Capital, Ping An, Sunley House, CapitalG (formerly known as Google Capital), HDFC Bank, Axis Bank, Times Internet, Trifecta, Ratan Tata, Times Internet Limited, Kreatif Media Karya and Dentsu.