*Hindsight: Ivan Gonzalez on growing pains and early outlook of the season*

~ The defender feels early setbacks will bring the team more together ~ 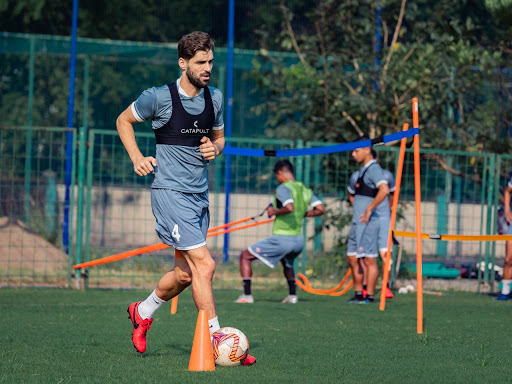 Goa, November 26, 2020: The new season under Juan Ferrando has once again seen FC Goa catch the eye for their fluent football. That, however, has not translated into points for the Gaurs.

The lack of points on the board for the defending league champions, however, hasn’t deterred veteran defender Ivan Gonzalez in either the final goal or expectations from the team. The Spaniard, in fact, feels that this is an experience that will serve them well and will bring the team even closer together.

“What we have shown so far is that we are a very good team - both in terms of technical ability and mental strength. Good teams become stronger in bad times,” stated Gonzalez.

“I think it was good that these two games and the experiences attached with them happened to us at this time. Of course there is no good time for a loss. However, I feel this will help us come together even more and give us the opportunity to show how strong we are as a unit and our ability to comeback from any situation.”

A brilliant comeback against Bengaluru FC was followed by a an equally impressive start to the game against Mumbai City FC. That game, though, turned on it’s head when the Gaurs were reduced to 10 men on the 40-minute mark.

Despite being a man down, there was no diminishing the sense of adventure in the Gaurs. And it was only the brilliance of Amrinder Singh in the Mumbai goal that stopped Goa from taking the lead.

“I’m very proud of my team. We are playing well. We haven’t had luck on our side but the confidence in the team remains very high. We have faced two of the best sides in the league and for most part of both games, we were superior than both,” the Spaniard added.

“We have not lost our style of play in either of the games. That is very important. We were well prepared. And yesterday, I liked the team's reaction when we played with one less player.”

In the midst of a process

Gonzalez, though, fully understands the need to make the most of the side’s good play. And he believes, that the best is to come for the Gaurs in the days ahead as the team gets to know each other better and pay more attention to the details.

“We have to improve and pay attention to the small details. We have been superior to our rivals, but lapses in concentration have been decisive. That’s the biggest reason that we only have 1 point,” the 30-year-old opined.

“Losses are a part of the game. We have to be very professional. You play as you train. That’s the reality. If we want to grow as a team, every loose ball, every missed pass, every foot we put wrong has to hurt us. We have to be even more competitive - both in training and games. And that goes for every player, including me.

“It’s a new team, but it’s amazing how we have gelled. This takes a while, but we are in the midst of a process. We have shown our style of play and have to build on that. Our style and belief in the same are what will make us stronger in the days to come. We must not let ourselves be guided by the results at this stage. We have to focus on the process and correcting our mistakes.”

The Gaurs will look to bounce back against NorthEast United when the Higlanders pay a visit to the Fatorday Stadium on Monday, 30th November. The game is slated for a 7:30 pm kickoff.