The conference began with an address from the chief guest, the 2020 Nobel Laureate in Economic Sciences, Prof. Robert Wilson, who is also the Adams Distinguished Professor of Management, Emeritus, Graduate School of Business, Stanford University followed by the address of the keynote speaker Dr Rajat Kathuria, Director and Chief Executive, Indian Council for Research on International Economic Relations, New Delhi. The theme of the conference was ‘Strategy of Auctions and the way forward for India’.

Students, faculty, staff, and other guests attended the virtual conference with the economic stalwarts. In his address, Prof Wilson said “In the early years of the initial spectrum auctions, it was uncertain if the technology would even work and uncertainty about what would be the market penetration. At the time in the US the company we worked with estimated an upper cap of 30% market penetration. Look at the world now; there are more phones than there are households. So, this was a case of extreme estimation error for the sellers, but firms profited enormously over time.” 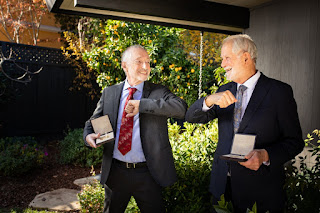 Prof Wilson while answering the questions of strategies in auctions, explained the ‘use it or lose it’ rule, exposure and problem. With a few real situations, he taught the students, how to tackle a ‘snake in the grass’ kind of bidder. Further to that, he said, “Companies want to bid to win; they want the minimum bid that is sure to win. They are only concerned about the probability of winning, and rarely consider how that interacts with the value of actually having won.”

Prof. Wilson, easily explained winner curse by saying “It is important to look at the common value component of public goods on auctions, which are the features that affect everybody’s valuation. When oil companies bid for leases everybody is concerned with a few key attributes like: whether the oil is there, how much, at what price can the oil be sold. All bidders are trying to estimate the same thing, and no matter how unbiased these estimates, will always be subject to error. In fact, these estimates are so imperfect that two companies can look at the same seismic output and come up with completely different estimates. The one who wins is the one with the highest estimate, even though ex-ante, the estimate appeared unbiased it is revealed after the fact to be biased.”

With Prof Wilson’s address, Prof Sanjoy Sircar (Professor of Finance, Great Lakes) set the tone for the keynote address. He explained the current auction trends in India with a few examples. With that, the Keynote address was delivered by Dr Kathuria on several aspects and spectrums including the allocation models, value determination, and spectrum scarcity of India. While evaluating the spectrums of India, Dr Kathuria said “Spectrum is a quasi-public good which can provide substantial welfare and social benefits. So ultimately the challenge that the government faces is, how to manage the trade-off between its revenue objectives and social welfare objective.”

Dr Suresh Ramanathan, Dean & Principal at Great Lakes said, “Great Lakes Institute of Management has always tried to leverage its unique global network and bring the sharpest academic minds from around the world to our students. The opportunity to interact with an eminent personality and a Nobel laureate like Professor Robert B. Wilson will challenge young minds to learn and experience what cutting edge knowledge is like. We are confident that this webinar spurred conversation and excitement in the inquisitive minds attending the finance and banking conference hosted by Great Lakes.

About Great Lakes: Great Lakes Institute of Management, Chennai founded in 2004 by Padma Shri Awardee Dr. Bala V Balachandran is one of the premier B-schools in India. Great Lakes has, within a short span of 15 years emerged as a top-ranked business school. Great Lakes has 50+ full time faculty and 150+ visiting faculty including over 25+ international faculty from top global schools like Yale, Kellogg, Stanford and Harvard. Further collaborations with world’s leading institutions like University of Houston, University of Bordeaux, Hongkong University of Science & Technology (HKUST), University of Missouri, Kansas, Illinois Institute of Technology, Chicago and Babson College etc., have helped Great Lakes in globally benchmarking its programs.

Great Lakes, Chennai, was accredited by Association of MBAs (AMBA), UK in 2014 and became the youngest B-school in India to receive this prestigious international accreditation. In 2015, Great Lakes, Chennai also received international SAQS accreditation and in 2017, its two year PGDM program was accredited by National Board of Accreditation (NBA). For the years 2018 -2019, Great Lakes was ranked No.1 in India by Analytics India for its Analytics program. Great Lakes, Chennai was ranked 5th by Outlook India among top private MBA institutions, 9th by Business India, 15th by Business Today and 18th by NIRF among top 10 Indian B-Schools. It was also placed in Super League 2 category by Business Standard in the year 2019.

Led by exceptional academic faculty, steered by an outstanding advisory council and buoyed by the international collaborations, Great Lakes has been constantly innovating to stay ahead of the needs of our businesses and community. It is the first B-school in India to offer full time specialization in Analytics and also first to introduce AI and Machine Learning specialization.