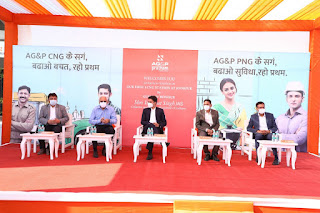 Fortifies transition of Rajasthan, the largest state in India, into a gas-based economy

Jodhpur, 28 January2021: AG&P,the global downstream LNG and gas logistics company, today announced the opening of its first whollyowned Liquefied &Compressed Natural Gas (LCNG) station in Jodhpur, Rajasthan, under its India City Gas Distribution (CGD) arm - AG&P Pratham. Located at Kalptaru Jodhpur, Rajasthan, the LCNG station comprises of two (2) storage tankswith capacity of 56 MT of LNG storage and gasification.The LCNG station will ensure uninterrupted access of natural gas to commercial, industrial, and residential customers not connected to the gas pipeline, including owners and drivers of any CNG-powered vehicle – from auto-rickshaws to taxis, cars and light commercial trucks. This is the first LCNG station in the entire state of Rajasthan .

With the opening of the wholly owned LCNG station, Jodhpur now has six AG&P Pratham CNG stations in operation in the areas ofDiesel Shed, Pal Road, Lalsagar Road, Soorsagar Road, Mandore and Salawas.Three more–two on Pali Highway and one on Banar Road are expected to be commissioned next month. AG&P Pratham is also laying pipelines in Jodhpur to deliver Piped Natural Gas (PNG) directly into thousands of homes, businesses, and factories.

In a pre-recorded congratulatory message, His Highness,The Maharaja of Jodhpur Shri. Gaj Singh, said that the launch of AG&P Pratham’s LCNG station, along with the opening of multiple CNG stations across the stateis critical for the distribution of natural gas, a fuel that willmake life easier for the people of the state,whilebeing instrumental in controlling air pollution.

Speaking at the inauguration of the LCNG station, Mr. PPG Sarma, Managing Director – City Gas Distribution, AG&Psaid, “We are deeply honored to receive a congratulatory message from His Highness, The Maharaja of Jodhpur,Shri. Gaj Singh, commemorating the opening of the first LCNG station in Rajasthan. We are also very privileged to be graced by Shri Inderjeet Singh and are grateful for the invaluable support of all arms of State Government in establishing the CGD infrastructure in Jodhpur. AG&P is committed to drive the adoption of natural gas as a primary source of fuel and help herald India towards a clean energy future.”

Mr. Manish Goswami, Chief Operations Officer, Rajasthan, Tamil Nadu & Andhra Pradesh and Head, Technical Services, AG&Padded, “AG&P Pratham’s firstwholly-owned LCNG station is another important milestone in making CNG and natural gas easily accessible for the people ofRajasthan. Over the next five years, we will be building 50 CNG stations in Jodhpur, Barmer and Jaisalmer and connecting over 2,00,000 households to PNG, ensuring non-stop supply of this safe, low cost and eco-friendly fuel. We will be offering special incentives to people to make the switch, so they can begin generating more business, more profits and more savings, while ensuring cleaner air for healthier living.”

AG&P’s India-wide CGD network plans to cover more than 278,000 square kilometers area in 31 districts across five states – Rajasthan in the north, and Kerala, Andhra Pradesh, Karnataka and Tamil Nadu in the south – and will comprise setting up over 1,500 CNG stations and more than 17,000 inch-km of pipelines.

AG&P Pratham, India, is the City Gas Distribution (CGD) arm of the Singapore-based AG&P Group, a leading downstream LNG and gas logistics company. We distribute LNG and natural gas from our terminals to our end-customers across the power, industrial, commercial, domestic and transport sectors.