Get ready to celebrate Republic Day, Full-On Chulbul Pandey-style with the premiere of Dabangg 3 on &pictures 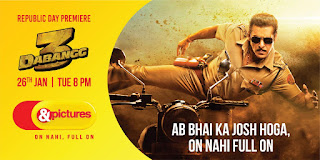 So, get set to Witness Salman Khan and his pyaari Rajjo, Sonakshi Sinha along with stellar performances by Prabhu Deva, Mahesh Manjrekar, Arbaaz Khan and the debutant, Saiee Manjrekar as they bring the exciting universe of Dabangg to screens.

Talking about the film, Saiee Manjrekar said, “I entered B-town with Dabangg 3, and being part of such a successful franchise that equals home is an amazing feeling. Chulbul Pandey’s character has always fascinated me, how he draws his own grounds of justice without fearing anyone and being charming and flawlessly funny at the same time. I’m looking forward to the Republic Day Premiere of Dabangg 3 on &pictures and celebrating the quirkiest and edgy hero that the nation loves!”

Chulbul Pandey returns with his witty yet fearless self, to encounter an enemy from the past, Balli Singh. In order to protect his family, Chulbul Pandey must muster up the courage to demolish his inner demons before it's too late!

As a prelude to the Republic Day premiere, &pictures is all set to heighten spirits with their ‘Full-On Josh’ Film Festival from 21st January to 25th January, everyday at 8 PM. The festival will showcase films such as Surya, Satyamev Jayate, Uri: the Surgical Strike, Commando 3 and Holiday: a Soldier is never off duty.

So, get ready, Kyunki Bhai ka Josh hoga On Nahin Full-On with the Republic Day Premiere of Dabangg 3 on 26th January at 8 PM on &pictures