Playing the character of Yeshu’s father Joseph is an honour”, says AaryaDharamchand

Arya Dharamchand the telly-actor who hails from Jammu is all set to portray Joseph in &TV’s latest offering ‘Yeshu’. In a candid conversation, Arya expresses his joy of making a comeback and eagerness. 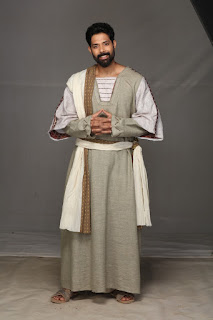 1. You were on a short break before Yeshu. What made you think that the show will be a good comeback for you?

I would call this a fair comeback, as the last show I did was around four years ago. I even did a web-series which is yet to be released, as for the television industry, I looked hard and long but couldn’t find anything of my interest. I was lucky enough that 2020 gave me Yeshu at such an amazing time, this role seems heavy with an intensity to it. I am looking forward to my fans seeing my on-screen after a long time.

2. What is the role you are playing? How satisfied are you with the character?

I am playing the role of Joseph, Yeshu’s father who is assigned the duty of protecting his family. He is famously known to have been venerated as a saint. This role is therefore of critical significance and has set a high benchmark for me. I hope to do justice to the role. I am extremely happy with this role, I couldn’t have asked for a better one! Playing Yeshu’s father is an honour for me, I am highly obliged that the makers of the show believed in my calibre and saw me fit to essay the role. I have already started reading up on Joseph to fully understand his position and I am looking forward to seeing how the character shall be developed in the show.

3. How did you bag this role? Any special preparations you are undergoing to get into the character?

The auditions for Yeshu was an unusual one, I recorded it over my phone and sent it to the production through WhatsApp. Technology has really played a big role in the way things are carried out now, so it was truly a novel experience. Yes, definitely I am preparing, I am currently reading up on the life of St. Joseph to learn more about the character that I shall be encompassing in order to incorporate a few elements of human emotions and behaviour.

4. What exactly is the storyline? What are your expectations from the show and the viewers?

‘Yeshu’ is a story of an exceptionally benevolent child who only wants to do good and spread happiness all around him. His love and compassion for all is a stark contrast to the dark, evil forces prevalent during his birth and childhood. Witnessing the various atrocities on his family and in society has a deep impact on him. His attempt to help others and ease their pain often leads to situations where he inevitably ends up being hurt and condemned, by not just the oppressors, but also the people at large. But even that doesn’t stop Yeshufrom continuing on his path. It is not only the most iconic story of good versus evil, but it also captures the beautiful relationship between Yeshu and his support and guide – his mother. Yeshu is an untold and unheard story, first time seen in the Hindi GEC space. I am looking forward to work with the stellar cast of the show. I am sure the show will strike a chord with the audience and will receive acceptance and appreciation. We all are very excited and looking forward to our viewers’ reaction.