Siddharth Nigam and Aamir Dalvi reveal that they are the bad boys on the sets of Aladdin: Nam Toh Suna Hoga!

No bond is stronger than two people who are on the same adventure. The bond that Aamir Dalvi and Siddharth Nigam shared on the sets of Sony SAB’s Aladdin: Naam Toh Suna Hoga is irreplaceable for both of them as Siddharth found a mentor in Aamir and Dalvi too found his little brother in Siddharth. While the duo are seen fighting each other on-screen, they share a rather special connection on the sets of Aladdin: Naam Toh Suna Hoga. The duo agree to be each other’s partners in crime and can be often found goofing around on the sets while adding a spark to everyday shoots. Reminiscing about their journey so far Aamir and Siddharth spilled their secrets and revealed their bond which goes around trust, respect, fun and their on-screen camaraderie which is famously known as Zaladdin. 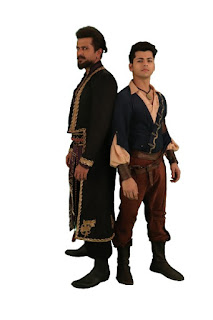 Aamir Dalvi, reminiscing his memories with Siddharth and the fun they have, said, “We have a lot of respect for each other even though he is younger than me. Our camaraderie as two artists and individuals, coming from different age group and backgrounds is beautiful. Siddharth is focused and disciplined and he gets a lot of energy on the sets. Matching his level of energy is a lot of fun as it creates a different environment altogether which eventually transfers into the work that we do together. For him, I have always been Aamir Sir despite our mischief and friendship. I think that is very sweet.”

Siddharth Nigam, talking about his experience with Aamir Dalvi, said, “We are like the bad boys of the set who enjoy each and every moment. Whenever we both have our shoot on the same day, the set comes alive and everybody gets tired of our pranks. We have our own mischievous jokes between us due to which #Zaladdin is trending more than #Alayasmine on the sets. I feel, we are the Cool Hero and the Cool Villain on television. The very first impression I had of him was that he must be full of attitude as he is a senior in the field of acting but when I met and got to know him, I understood that he is one of the most down-to-earth and a humble person. We are not distant because of his seniority. He balances the difference perfectly and has always made be my true self. We pull each other’s legs, we laugh and we work seamlessly as co-stars.”

Talking about the how he troubles Siddharth on the sets, Aamir said, “I always trouble him like a baby brother and also in ways you would do to your buddy. I think he will give instantly agree to the fact that I trouble him the most during the shoots. What makes it fun is how sportingly he takes ever joke and little bit of leg pulling. When I go back in time, I recollect that he always appreciated me for my earlier show “Super cops-Shapath” and that’s how we started talking and our bond grew over the period of time.”

Siddharth Nigam found a supportive mentor in Aamir Dalvi. Adding to this he said, “Aamir Sir has been supportive throughout my journey as Aladdin. He is one of the most experienced actors on the set of Aladdin: Naam Toh Suna Hoga. I have learnt a lot from him, he has been my mentor, be it my acting skills or important life lessons, and so whenever he is on the sets, he brings such type of young energy along with him that shooting feels so chill, which I appreciate so much.

Aamir Dalvi, talking his journey as Zafar in Aladdin: Naam Toh Suna Hoga, he shared, “Even though we are enemies on screen, we always collectively work on a scene to make it more impactful. It’s never like I am doing my job and he is doing his. It is always a collaborative effort to entertain our audiences. If I would have to sum up my journey on this show - I would just say…. BEHETEREEN!”

Siddharth further added, “I am never going to forget all of the memories that I have shared with him and will cherish it forever in my life. Because this kind of rapport found and felt elsewhere. In order to sum up my bond with him, I will just say that we are compatible with each other and the bond that we share is irreplaceable.”

Enjoy this special bond between Siddharth Nigam and Aamir Dalvi as the dynamic Hero and Villain duo only on Aladdin: Naam Toh Suna Hoga every Monday-Friday at 9:30PM only on Sony SAB