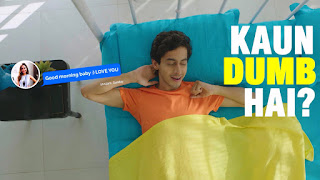 February 2021:A group of India’s most prominent condom manufacturers and marketers who represent India’s Condom Alliance announced the launch of “Kaun Dumb Hai” - a new age campaign directed toward youth. Through a witty video the campaign urges the youth to not be ‘dumb’ by believing the myths and misconceptions that surround the use of condom and instead to identify themselves as smart and use a condom.

According to the National Family Health Survey (NFHS) – 4, around 78 percent of Indian men between ages 20 and 29 do not use any method of contraception. From misconceptions such as reduced pleasure and a negative impact on performance to the fear of being judged at the pharmacy when buying the condom or fumbling while using the condom during a sexual encounter are some of the reasons for not using a condom. These reasons seem to act as the obvious deterrent to the use of condom, especially amongst the youth who are indulging in their first sexual act or for the more sexually active youth who are most concerned about their image in front of the partner.

The campaign “Kaun Dumb Hai”, which translates into the term – who is dumb, uses a slogan that sounds like ‘Do you have a condom?”. It describes typical times when a condom should be used and lists the myths that often deter couples from using one. The lyrics of the song simultaneously associate the use of condoms with positive attributes such as being smart, trendy and responsible, to encourage the youth to dispel negative notions about condoms and make the effort to use a condom for the sake of their partner as well as their own reproductive health.

Commenting on the launch of this unique campaign Vivek Malhotra, Founding Member, Condom Alliance and CEO, Population Health Services India said, “The low contraceptive use among Indian men is a matter of grave concern and will lead to an increase in the number of teenage pregnancies and sexually transmitted infections (STIs) in the country. The idea of this campaign is to highlight the importance of using condoms to encourage the youth to accept condoms as an important method of contraception expanding their basket of choice”.

Representing one of the country’s leading condom manufacturers, Ajay Rawal, FoundingMember, Condom Alliance and General Manager - Marketing, Raymond Consumer Care, said, “The overall usage of condoms has increased from 7.1% to 10.2% in the last four years in 17 out of 22 states alone for which NFHS-5 data is available. To capitalize on this increased acceptance, the Kaun Dumb Hai campaign is looking to connect with the youth and align with their inherent desire to appear trendy while staying safe and healthy. Carrying, asking for, insisting on or using condoms portrays one to be intelligent and responsible; and most importantly, the women who ask for or carry condoms are not promiscuous, but smart and savvy. The aim is to ensure long-term behavioural change among the youth in the country.”

The campaign will also be rolled out on ’50 Shades of Ishq’ Facebook and Instagram handles and shared with key influencers to help reach the masses. The three month-long campaign will include a series of digital content that will focus on reiterating the issue and will be used by condom marketers to help reach a larger audience. Engaging digital formats such as a dance challenge are being planned.

The Condom Alliance was established in January of 2019. The alliance has a ratified charter endorsed by India’s condom market leaders such as DKT India, HLL Lifecare Limited, Janani, Population Health Services India (PHSI), PSI India Private Limited, Reckitt Benckiser, Raymond Group, TTK Healthcare Ltd, to name a few, accounting for the majority of condom sales in India. The Condom Alliance is poised to expand its work by engaging with multiple stakeholders to pursue its mission of improving the health and well-being of young people in India. The Alliance aims to achieve this by collaborating with the Government of India, developmental NGOs, donors and the private sector to remove barriers in order to grow the condom market.