~ Gaurs look to build on their eight-game unbeaten run ~ 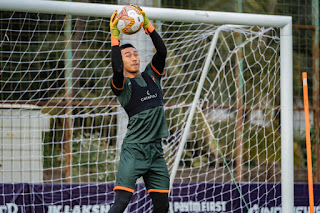 Goa, February, 2021: Juan Ferrando sees his men head into Monday night’s clash against Mumbai City at the GMC Athletic Stadium in Bambolim on the back of an eight-game winning streak. However, the Spaniard would have liked some more games in the wins column with the Gaurs getting all three points on only three occasions from their last 8 ventures onto the field.

Up against them on Monday will be table-toppers Mumbai City. The Islanders have refurbished this season with former FC Goa head coach Sergio Lobera in charge along with six players from the league-winning Goa side from last season.

The familiarity has helped them climb to the top where they hold a slender three-point lead over ATK Mohun Bagan.

Meanwhile, FC Goa will look to first sure up a spot in the playoffs. The Gaurs are currently in third place thanks to their 22 points from their 15 games - level on points with Hyderabad FC and NorthEast United FC, but ahead on goal difference.

With the business end of the season near us, both sides will look to hit the pedal to the metal and eke out a vital win. And to give you a bigger and wider picture of what awaits us on Monday night, here are 10 things you should know:

2: FC Goa is one of only two teams in the Hero Indian Super League to still remain unbeaten in this calendar year. The other team being Hyderabad FC. The Nizams have won 3 and drawn 4 of their 7 in 2021. Meanwhile, Juan Ferrando’s men have won 2 and drawn 5.

4: Nobody in the league has seen more shots hit the woodwork than Jorge Ortiz. The FC Goa forward has seen 4 of his shots crash off of the frame of the goal. Only Odisha’s Diego Mauricio has been as unlucky.

4: After having to come from behind time and against to begin the campaign, the Gaurs have lost points from winning positions of late. Juan Ferrando’s men have been the first to score in 4 of the side’s last 5 games but could only register one win.

7: The game is expected to be a thriller with both coaches harbouring a mindset of attacking football. And that may pose hindrances to the efforts in defence. The two teams combined, have not kept a clean sheet in any of their last 7 games. Mumbai’s last clean sheet came on January 16, when they had Amrinder Singh to thank for a goalless draw against Hyderabad. Meanwhile, the Gaurs last kept a clean sheet on January 14 in a 3-0 win over Jamshedpur.

7: FC Goa still holds the record for the biggest win in the Hero Indian Super League. In a game against Mumbai on November 17, 2015, the Gaurs trounced the Islanders 7-0. It was the only game ever in the Hero ISL to see two hat-tricks being scored by players from the same side. Dudu and Thongkhosem Haokip notched up three goals each with Reinaldo scoring the other.

8: The Gaurs’ run of 8 games unbeaten is the biggest such streak since going 8 games unbeaten to round off the league stage in 2014. Goa’s run of 3 wins and 5 draws during this period means that they would not have tasted defeat in 52 days when they take to the field against Mumbai.

164.3: Alberto Noguera’s assist in the last game against NorthEast United was his 6th of the season, tying him for the most in the league alongside Hugo Boumous. This translates to an assist every 164.3 minutes surpasses that of the Frenchman who provides an assist every 173 minutes.

191: Edu Bedia’s play in midfield has been vital to the FC Goa blueprint. He is not only the shield in front of the back four, but also the main instigator of offensive actions. A box to box midfielder, the former Barcelona man plays a vital role in the final third for the Gaurs and no player has as many accurate passes in the final third as Bedia (191).

419: The Gaurs’ philosophy that emphasises on ball possession is not only limited to interplay in their own half. FC Goa’s sense of controlled aggression and adventure often spills over to the opposition box. In fact, three Gaurs lead the league when it comes to passes in the opposition box viz. Edu Bedia, Alberto Noguera and Jorge Ortiz (who have 419, 341 and 315 passes respectively).