On public demand! Jijaji Chhat Parr series back with a bang on Sony SAB

Sony SAB is all set to bring back one of their most quirky and funny shows but this time with a hint of mystery. Bringing back everyone’s beloved characters with its comic madness is Jijaji Chhat Parr Koii Hai, which is set to grace your television screens soon. 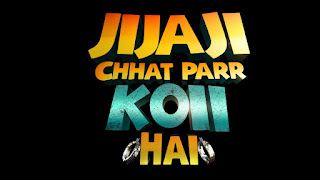 With a fresh storyline and unique characters, the show will take the viewers to Delhi’s Punjabi Bagh into the world of Jindals and Jaldirams. Based on an age-old property dispute between the Jindal and Jaldiram families, the show brings a twist with an element of mystery that dwells in this ancestral property. Another point of conflict are the two families’ respective businesses, that of Jaldiram’s sweet shop and Jindal’s garage which have an outlet next to each other in the front yard of the house.

Taking the viewers through the laughter riot and adding to the show's quirk and madness is stunning Hiba Nawab, to be seen as Jaldiram’s daughter CP (short for Connaught Place), Sony SAB’s new Jijaji aka Jitendra Jamvant Jindal will played by dashing Shubhashish Jha. The traditional favourites too comeback with this Jijaji franchise with Anup Upadhyay, to be seen as Jaldiram, the proud owner of Jaldiram Sweets, the bubbly yet cheeky Soma Rathod, to be seen as Jaldiram’s wife Sofia, contesting for Jaldiram as their lawyer and Sofia’s brother, Chakral will be Firoz Khan and immensely charming Raashi Bawa as a Sunita, waitress in Jaldiram sweets. The star cast will be graced by some new faces such as Jitu Shivhare as Nanhe, Jijaji’s father, Sucheta Khanna as Bijlidevi aka Jijaji’s mother and Vipin as Gulzar, as Jindal’s adopted son and Jijaji’s best friend, fighting the case for the Jindals will be father-son duo Dhyanchand and Vigyanchand, to be played by Nagin Wadel and Sumit Arora respectively.

While the stellar cast promises laughter, fun and entertainment the mystery still remains, who is this unknown woman who walks the hallways of this haveli?