Get ready for an unpredictableand thrilling ride as & pictures premieres the Ishaan Khatter (Blackie) and Ananya Pandey (Pooja) starrer Khaali Peeli on 19th March at 8pm. This movie is a perfect watch for all those who chooses to hustle every day and follow their heart. It’s a total package of entertainment, comedy, action and thrill that you just can’t miss. 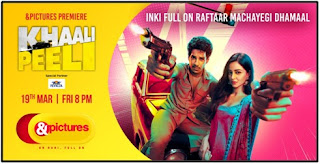 Khaali Peelishifts gears between comedy, drama and action with ease and promises to keep you hooked. It’s a perfect Bollywood flick told through the eyes of two young street-smart Mumbaikars, who are always on the run, driven by their dreams and free spirit.

The movie effortlessly brings back the awesomeness of 80s-90s Bollywood masala thrilland merges it with the adventures of Blackie and Pooja. Their characters have a lot in common with the youth, who always want more from life. The movie also recreates the true sights, sounds and charm of Mumbai. Khaali Peeli is a fast-paced film with sharp turns and spectacular reveals. The ‘fun on the run’begins whenBlackie, a taxi driver, crosses paths with Pooja.