Manoj Tiwari, Ravi Kishan and Sapna Choudhary to unravel the mysteries of the most inconceivable crimes in &TV's riveting crime-series, 'Mauka-E-Vardaat.'

National, March 2, 2020: There is only one difference between us and the world of crime, which is of possible and impossible. What we think is impossible is invariably possible in the world of crime. And when we come across stories of impossible crimes, it often makes us think, how can this even happen? Presenting extraordinary tales of impossible crimes which challenge your imagination and leave you speechless, is &TV's latest show, 'Mauka-E-Vardaat', a riveting weekday crime series. 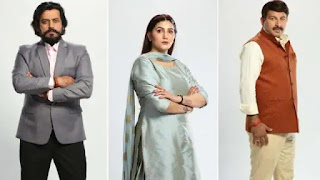 'Mauka-e-Vardaat' will highlight mysterious crime cases that will boggle the audience's mind, compelling one to believe that the rhetoric 'reality is stranger than fiction'. The show will feature Manoj Tiwari, Ravi Kishan and Sapna Choudhary, giving a glimpse into the most baffling crimes. Produced by RaviRaj Creations, Hemant Prabhu Studioz, A&I Productions and Spacewalkker Films, Mauka-E-Vardaat will premiere on March 9, 2021, at 7:00 pmon &TVand will air every Monday to Friday.

Against the backdrops of real locations, 'Mauka-e-Vardaat' will present various stories of the most inconceivable, unimaginable crimes and their approach, and methodology. Each story, packed into a daily powerful weekday episode, will have a woman protagonist who will play an instrumental role in unravelling the mystery of these baffling crimes. The show will be an anthology series featuring the most thrilling and most mysterious stories inspired by real-life, leaving the audience at the edge of the seats with the most unpredictable events.

Talking about this new offering, Vishnu Shankar, Business Head, &TV, said,“Crime shows have always had a certain allure as viewers are drawn in by the mystery of who did it or what was the motivation. For the first time we bring to you a show that presents the most bizarre and seemingly impossible crimes which will defy all logic and leave the viewer wondering not who or why, but how? How is this crime even possible? How did anyone manage to pull this off? We are proud to present Mauka-E-Vardaat, a riveting weekday crime series on &TV. Inspired by real-life incidents, these fictionalised stories will intrigue and challenge the audience's imagination like no other."

Manoj Tiwari said, "I am excited to be a part of the show. Crime is a scary and often uncontrollable part of life. Whenever a crime occurs, it shocks and makes everyone nosy, wanting to find out what, why, and how behind it. However, Mauka-E-Vardaat goes a step further and dwells into suchcrime mysteries that are beyond belief, compelling the audience to think, Yeh Hua Toh Kaise Hua?"Ravi Kishan said, "Every day one reads or hears of so many crimes happening in and around us. These incidents are, no doubt, disturbing but some are so shocking and bewildering, not just by the mere intensity of heinousness but also by sheer puzzlement of how a seemingly impossible crime was made possible! I have been a part of several shows, but the concept of Mauka-E-Vardaat is refreshingly different with gripping stories of the most unbelievable crimes."Sapna Chaudhary said, "What stood out to me in Mauka-E-Vardaat, is that the storytelling is from the point of view of a woman protagonist who will solve the mystery of these unthinkable crimes, which is a USP of the show and make for an interesting watch."

Raviraj Mahato, Producer & Director, RaviRaj Creations, said, "When we think of a crime show, there are a lot of details that minutely need to be considered from conceptualizing the story to its visualization. The stories chosen for Mauka-E-Vardaat are inspired from most thrilling and mysterious real-life incidents, fictionalised to suit the audience's sensibilities, leaving them at the edge of the seats with the most unpredictable turn of events."Hemant Prabhu, Producer & Director, Hemant Prabhu Studioz added, "Mauka-E-Vardaat stands out for its unique concept of incredibly unthinkable crimes and gripping narratives. Each episode will showcase the dark side of human emotions, emphasizing on how the crime has been done, having its twist and turns, which is sure to stump viewers and keep them coming back for more."Shaiju Nair, Producer, A&I Productions,said, "Audiences enjoy intriguing and intensifying content with an element of suspense. Taking them on a roller-coaster ride of thrill and mystery will be &TV's Mauka-E-Vardaat. We have undertaken tremendous research and gone through multiple stories over several months. We are now ready to present some of the most fascinating and thrilling twisted crime mysteries that will boggle everyone's mind."Akshay Singh, Producer, Spacewalkker Films,concluded, "For a viewer, every twist building up to how the crime took place is extremely crucial as that is the key engagement factor. Mauka-E-Vardaat will showcase the most appalling and extraordinary tales of mindboggling crimes. We have worked hard to create riveting episodes that will hook the audience to their television screens."