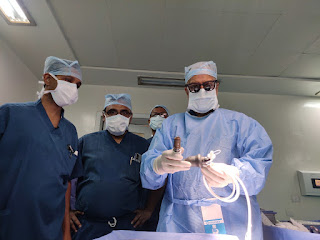 Kolkata, 25th March, 2021: Medica Group of Hospitals, the largest private hospital chain in Eastern India, at its flagship facility Medica Superspecialty Hospital in Kolkata conducted a critical operation for around 6 hours to retrieve a 54 year old gentleman, from Chhattisgarh, and pioneered an ingenuous marvel in the treatment of heart implants by having the first LVAD ( Left Ventricular Assist Device ) – Artificial Heart implant in Eastern India, where the team of experienced doctors from departments of Cardiac Surgery, CTVS and Cardiology joined hands together for this unique case. The team put in their combined efforts under the leadership of Dr. Kunal Sarkar, Senior Vice Chairman, Director and Head of Cardiac Surgery at Medica Superspecialty Hospital who was ably supported by the Cardiology team led by Prof. Dr. Rabin Chakraborty, Senior Vice Chairman Medica Superspecialty Hospital, Dr. Dilip Kumar, Senior Consultant & Director Cath Lab Services, Department of Cardiology, Dr. Saptarshi Roy, Senior Consultant & Cardiac Surgeon, and experienced CTVS team, Dr. Arpan Chakraborty and Dr. Dipanjan Chatterjee helped achieve this momentous feat on 22nd March 2021. Having set benchmarks in patient care, Medica Superspecialty Hospital, which has a world-class comprehensive department for heart failure and heart transplant, at the facility, in Kolkata, is widely known for its excellence in cardiac care has now added another feather to its cap, after successfully completing Eastern India's first comprehensive treatment by Artificial Heart Implant Program with extensive options for treatment and management of congestive heart failure.

Dr. Kunal Sarkar, Senior Vice Chairman, Director and Head of Cardiac Surgery at Medica Superspecialty Hospital who led the team of surgeons said, “The patient had visited us in a critically ill state with a failing heart and rapidly deteriorating health. We had no recourse but advise to undergo a heart transplantation or artificial heart implant. Since this was the first of its kind in this part of the country, we were extra cautious and currently after a successful surgery, he is under constant monitoring of his implant.”

Dr. Sarkar further elaborated, “The Artificial Heart Device (Heartmate 2) is a cutting edge, titanium Impeller pump with ruby bearings, which pumps blood at 9000- 12000 revolutions per minute. It works on electric current and wearable batteries that needs to be recharged every 12 hours. They are mobile and once patients recover; they can be physically active. We aim to be one of the main South Asian Centers for Advanced Cardiopulmonary Support.”

Heart failure is a major health concern worldwide including in India. Twenty million people world-wide suffer from heart failure, out of which India witnesses two million new cases every year with at least a third of them requiring advanced therapy to survive. The mortality rate in heart failure patients is as high as 30-40%, within a year of diagnosis. In India, the treatment for heart failure is restricted to medical therapy, revascularization therapy (restoration/augmentation of blood supply to the heart), valvular surgeries and cardiac resynchronization (heart pacing) therapy.

Cardiac care at Medica Superspecialty Hospital is well established and ranked amongst the finest in the country. Our goal is to provide the highest quality of patient-centered care, right here in India, utilizing our interdisciplinary approach, enormous talent and the multi-skilled resources within our team of highly accomplished doctors led by Dr. Kunal Sarkar. I on behalf of Medica applaud their feat of the first LVAD in Eastern India. I am sure we will be able to become the Centre of Excellence and will benefit many of our patients who will no longer have to seek treatment abroad for heart failure.”

This is a part of Medica’s Advanced Heart Lung Support program, which has performed more than 100 ECMO’s, numerous Heart transplants and now, the first Artificial Heart Implant.

About Medica Group of Hospitals:

Medica Group of Hospitals, one of the major and fast-growing chains of hospitals in Eastern India today, has built and managed numerous healthcare facilities across the Eastern region over the past few years. The healthcare chain launched its operations with Medica North Bengal Clinic (MNBC) in Siliguri in 2008 and soon followed up with its flagship Hospital – Medica Superspecialty Hospital (MSH) – in Kolkata in 2010. The group has footprints in West Bengal, Jharkhand, Odisha, Bihar, and Assam.