One should only put forward a helping hand when you mean to help, not with the objective of great returns

‘One who helps whole-heartedly doesn’t have to pretend’

It is wisely said; ‘When you do charity from one hand not even your other hand should know about it’, with the changing era and the mentality of today’s generation not much has remained same. Donation has become an affair of self-pride and society enhancement or rather a matter of social status and standing. We are all humans and are attracted to power of money in a way or other whether we realize it or not it gives us a sense of power, superiority, and vanity. More often than not we intend to lose our ethical values and the real reason for making that contribution, what we remember is that monetary power can buy any happiness in this world, however the truth in a complete reflex of this statement. 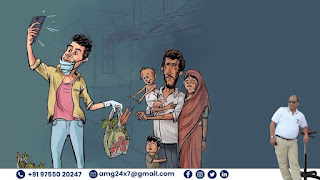 Can we for once ask ourselves; is donation a duty or it’s for making fun of others? Is it for a cause or for applause? Are we reel or real about it? Yes, at those times for once ask yourself what is it that we are trying to put across, is it the sense of responsibility towards the benefit of the society or just a feeling of superiority. We today, are living in a selfie generation, not only we mean selfie as an added character in our lives but it has become an extremely crucial element of our lives. Imagine people giving you ‘prasaad’ and taking their selfies and posting them on their timeline. What would that reflect as if you have asked the other person to serve you a favor, little did you actually realize but that exactly what people do today and provoke the poor.

If you are trying to aid because it evokes the idea that the poor are helpless and incapable of helping themselves, you are misinterpreting their individuality and degrading, dishonoring their dignity. It is strongly believed that god has kept same place for all human beings in his feet we are all one with no caste, creed or social status. If some of us are flourished and have a little or extra we should feel responsible towards society to donate with the objective of spreading equality. There is so much that we have procured from the society. The society comprises of varied segment and strata of people some are affluent and some are mere struggling for their survival.

When we make the donation for mere clicks, we are just trying to put forward that we have contributed selflessly for the benefit of the society. However, the said act is just for our self goodwill and selfishness. Being on the receiver end even the one accepting your charity is not acknowledging your act but is helpless with his individual need of the hour. Treating society with equality will make your path easier. Becoming a good human being is far more important than becoming richer and better because a life with no moral is a waste.

Do charity silently or the even your existence will become charity