• Awareness campaign for immunity boosters in the Corona era 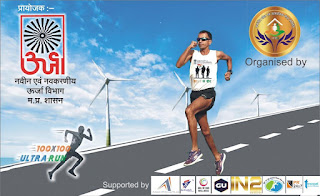 March 2021: Runner Sameer Singh is going to run a 10,000 km race “100x100 ULTRA” to prevent infection during the Corona period and to raise awareness about immunity among the people. For this initiative they choose slogan “Make yourself fit and Beat the covid". Sameer Singh, a resident of Kanahera village in the Mandsaur district of Madhya Pradesh, is now going to take a different route to spread awareness against Corona. 40-year-old Sameer believes that running is the most effective way to increase immunity by freeing our body from all germs and diseases. The main purpose behind this marathon race is to encourage those who shy away from running to run at least 2-3 km every day.

Sameer will make 4 daily trips in Mandsaur, located in the area of 25 km from 28 March. The race will be end on 6th July 2021. With this goal, he will be running a hundred kilometers daily. This will be recorded in the Guinness Book of Records as well. Troopel and PR 24x7 are the Online and PR partners for the ‘100x100 Ultra’ respectively. In the past, Sameer Singh has also participated in running more than 14 thousand km to support the martyred soldiers.

Kirui Kurui is koach of Sameer. Kirui Kurui from Kenya, himself is a well known runner and guided him from last five years. Under his guidance Sameer has participated in several events of the Marathon & Ultra Marathon. By getting technical training from Kirui Kurui, Sameer has not only created awareness towards the race but has also tried to unite people towards the race.

Notably, Sameer wanted to go to Research and Analytical Wing (R&AW) since childhood but since he is only a matric pass, he could not fulfill his dream of becoming an officer in RAW. Although, his passion for running earned him nationwide fame. Sameer collaborated with film actor Akshay Kumar in December 2017 to run a 14,195 km marathon race from Wagah border Punjab border in Haryana to Delhi, Rajasthan, Gujarat, Maharashtra, Goa, Karnataka, Kerala, Kanyakumari, Tamil Nadu, Andhra Pradesh, Odisha, Bengal, North-East states, Assam, Meghalaya, Tripura, Mizoram, Manipur, Nagaland, Arunachal Pradesh, Sikkim, Bihar, Uttar Pradesh, Uttaranchal, Himachal Leh and back to Wagha Border in seven months 6 days.

At the same time, his mother passed away, but Sameer, who was running to help the families of the soldiers, did not attend the funeral of the mother. It is worth noting that Sameer Singh now gives training for marathons while residing in Mumbai.