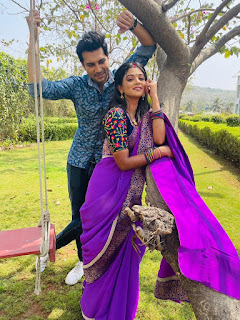 Episodes after episodes, &TV shows are bringing a lot of drama, suspense and comedy to the plate for its viewers. In the upcoming track of BhabijiGhar Par Hai, Modern colony meinchayegabhoot ka saya! For the sake of Anita Bhabi (NehhaPendse)’s grooming class fees, Vibhuti Narayan Mishra (Aasif Sheikh) spreads the rumour that a ghost named Daddy is possessing the people of Modern Colony. Will Daddy ka bhoot take over the Modern Colony? Meanwhile in Happu Ki Ultan Paltan, Katori Amma (Himani Shivpuri) is very upset about the fact that nobody has time for her. So she ends up taking Sanyas with Beni who is also upset as his wife is having an extra marital affair. Will Happu (Yogesh Tripathi) and the paltan be able to stop Amma from taking Sanyas? In ‘Aur Bhai Kya ChalRaha Hai?’, the TV has taken centre stage. Sakina (Akansha Sharma) aurShanti (Farhana Fatema) kinayi demand ne kardiyahaiMishra (Ambrish Bobby)aurMirza (Pawan Singh)kezindagimeinbawal. KaiseshaamtakSmartTVlaaye, yehisawalunhekhaye! Will Mishra and Mirza manage to get SmartTVs for their respective wives? Meanwhile in Santoshi Maa SunayeVratKathayein, Swati (Tanvi Dogra) and Indresh (Ashish Kadian) decide to visit Santoshi Didi at the ashram. On their way to ashram, Swati feels that somebody is watching her but she couldn’t figure out who that is and their car breaks down mid-way. They decide to spend the night in the nearby resort while Swati keeps feeling that somebody is spying on them. Will Swati and Indresh find out who is that mystery man watching them? Sharing more on the forthcoming track, Aasif Sheikh aka Vibhuti Narayan Mishra says, “Bhootkedarr se bade bade log koi bhikaamkarne ko taiyarhojatehain, toh bas iss khayal pe sawar ho karVibhuti ne fehlaya ye kissa. It will be fun to see how the Modern Colony reacts to this and what all ways they bring up to get rid of this bhoot!”.Himani Shivpuri aka Katori Amma says, “It is important to give attention and time to the elderly people in our families. They deserve our time and love. When we don’t give them the basic attention, they take such steps like Katori Amma took. But it will be really heart-touching to watch how the whole family tries to get Amma back and make her believe that she is important.”Pawan Singh aka Zafar Ali Mirza says, “Mishra and Mirza ka bas ek hi lakshyahaikiunkibiwiyankhushrahen, nahitohunsebura koi nahi. And to keep them happy they go around every possible ways to bring the SmartTV home as demanded by their wives. Viewers are going to have a fun time watching the Mishra and Mirza going through all the struggles for a mere TV.”Tanvi Dogra aka Swati says, “Day after day, the magnitude of hurdles in Swati’s life has only been increasing, but with her husband’s support and Santoshi Maa’s blessings she is ready to face any challenge. I am sure the viewers are going to be on the edge of their seats to find out who is that mysterious person watching Swati so closely yet so far to recognize!”