*Glan Martins and the story of two life-changing messages* 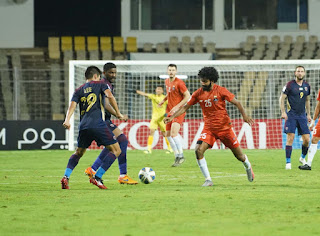 Goa May, 2021: For Glan Martins, January 31, 2021, was a date he was looking forward to, but not in the way that it eventually turned out to be. ATK Mohun Bagan was up against Kerala Blasters at the Pandit Jawaharlal Nehru Stadium in Fatorda, a ground he could call home in more sense than one.

He had helped Sporting Clube de Goa and Churchill Brothers to many a memorable victory on that hallowed turf. And yet there he was - struggling for playing time in his own backyard.

He had been the mainstay in all of the teams he had been playing for in the previous years, but the ISL was a different ball game. He was a central midfielder who many admired but not ‘many’ took a punt on him.

“I am glad that ATK Mohun Bagan gave me the opportunity to compete in the ISL. Without that stint, maybe I am not the player I am today with the determination to show people what I am all about,” said Glan Martins.

By the time the Kerala game was done (one which they won), it was again the same harrowing feeling in the guts of another match going by as he watched from the sidelines as an unused substitute.

“I know I was moving up a notch and the ISL would not be easy, but of course, I was disappointed with the lack of opportunities,” remarked Glan. “I had been waiting to play in the ISL for a long time. It can get a bit frustrating.”

At around 10:30 that night, upon arrival at the team hotel, a message changed it all.

“It was my agent’s name on the screen with a WhatsApp notification,” Glan recollects.

“He asked me, ‘There is a chance FC Goa will make a move for you. Would you like that?’ I just typed ‘Yes’ and sent it. I was just so excited and nervous at the same time.

“You see, everyone in my family is an FC Goa fan. Even when I got a chance to play in the ISL at the beginning of the season when I told my mother the news, her first question was whether FC Goa had asked for me or not.”

“He just told me to stay awake,” Glan recollected on a Zoom call - the reality of the modern interactions. “He just said if it was to happen, it has to happen in the next few hours, so I should not fall asleep.”

And he made sure that he did not. In the space of the next few hours, Glan completed all formalities and as India slept, the midfielder woke up to his dream move.

“I called my mother straight away. I had not played that day and she was thinking I would be sad. She was surprised I was happy and then I broke the news,” Glan says with a beaming smile on his face. “That was a great moment.”

“The time to adapt and adjust was very little for me at FC Goa at the beginning. After finishing my period of quarantine, the coach asked me to meet with him,” recalls Glan about his initial days with the team. “We had a session where he explained how he wants his team to play and where he sees me fitting in.

“He told me that he has confidence in my abilities and most importantly, not to be afraid of making mistakes as long as I can learn from them.”

The midfielder made his debut on February 4, coming on as a substitute as injuries forced Juan Ferrando into putting his new signing into the thick of things. 4 days later, he started against Mumbai City FC and the rest, as they say, is history.

That was the night when many people around the country and world spoke of his name - now combined with exasperated breathe as he produced what would later turn out to be FC Goa’s Fans’ Goal of The Season.

“When I received the ball I saw space ahead of me. I drove forward a bit before shooting. As a player, you always know when you have hit a ball well. And that was as sweetly I have ever,” said Glan while looking back at his only ISL goal so far. “I didn’t see the ball travel. When I looked up, the ball was past the keeper and thudded into the back of the net.”

The 26-year-old built on his performances throughout the season and by the end of the ISL season, he had become a vital cog in the FC Goa blueprint under Juan Ferrando.

And then came the AFC Champions League.

The Gaurs put up a defiant show. It was not only characterised by only grit but also a healthy appetite to play the game in the way FC Goa has been known to play - with poise on the ball. The opening two games saw Juan Ferrando’s men battle two points up against some of the biggest names in Asian football.

By the end of it all, they had more than just rubbed shoulders with the big boys of the continent, they had given a whole country hope. And in between all this, a message arrived on Glan’s phone again.

“It was after one of the games. I had just changed and got hold of my phone that I saw a message. It was the manager of the national team asking me for a number of details and documents,” Glan remembers again with a smile on his face.

“I knew what it meant. I called my mother to tell her the news. I remember sitting on the bus thinking of what had happened in the past four months. It was like a plot for a film. But I am not a hero, I am just Glan Martins.”

FC Goa is a professional football club based out of Goa that competes in the Indian Super League (ISL) and is the current holder of the Super Cup. Nicknamed the Gaurs, FC Goa has been one of the most consistent teams in the ISL - reaching 4 semi-finals and 2 finals in 7 seasons. The Gaurs are also the ISL side with the most wins and goals to their name.

In April 2021, FC Goa became the first-ever side from India to compete in the AFC Champions League.

Co-owned by Mr Jaydev Mody, Mr Akshay Tandon and Mr Virat Kohli, FC Goa is one of the few Indian Clubs to have a complete youth development ecosystem. Its U14, U16, U18 and Developmental Teams compete at the highest levels in Goa and nationally. The system has produced recognizable talents like Liston Colaco, Saviour Gama, Princeton Rebello and many more. The Gaurs were the champions of the Goa Professional League in 2018/19.