This Weekend, get ready for the biggest blockbuster of 2021, Vijay The Master, that broke box office records and uplifted the entire industry. The movie was the highest grosser to hit the theatres post relaxation of the first phase of lockdown, earning ₹263 crore worldwide. The larger-than-life movie brings together the brilliant Thalapathy Vijay and Vijay Sethupathi in a raw action and entertainment masterpiece. Directed by Lokesh Kanagaraj, Vijay The Master became one of the top celebrated films amongst audiences. The highlight of the movie is Thalapathy’s swag and charm, impactful action sequences and the stellar music tracks. The talented and beloved Thalapathy Vijay essays the role of JD with proclaimed villain Vijay Sethupathi playing the deadly goon Bhavani along with the talented Malavika Mohanan and gorgeous Andrea Jeremiah in pivotal roles. Be a part of the action-event of the year, with the World Television Premiere of the pan-India blockbuster, Vijay The Master, on 30th May at 8 pm. 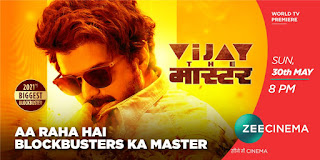 During the lockdown Hindi movie channels witnessed remarkable increase in the viewership. Due to the dearth of new Hindi movies and increasing demand for the fresh content, South dubbed movies are playing a key role in bridging the gap of new content for the TV viewing audiences. Through the stories written to entertain the whole family, south dubbed films appeal to audiences across markets. Audiences, now, are more vocal and expressive about their preference for the south dub films which is evident from the good performance of these movies on TV. Owing to their popularity, South dubbed movies have become an integral part of the line-up of every Hindi movie channel.

With the change in market dynamics, big budget South movies have become a national phenomenon. Today there is more awareness among the audience and they are excited for the theatrical release and TV premiere of these films. The anticipation and buzz around release announcements of one of the mega movies RRR shows the popularity of the genre among the global audience. Zee Cinema, with its World Television Premiere of Vijay The Master, is catering to the large set of audience who tune into South Hindi dubbed Movies.

Thrilled about the World Television Premiere, Malavika Mohanan said, “This was my first film with Vijay sir and it was really exciting for me to share the screen with him. Working with a sensation and an icon made this experience even more exciting for me. It was great to be a part of the movie where some of the best artists like Thalapathy Vijay, Vijay Sethupathi, Anirudh and Lokesh came together. We all were really close-knit and we spent a lot of time together. It was like working with a dream team. I had a great time working on the film and it’s one of the most fun projects that I have worked on. It’s been a great milestone to have in my career and I am looking forward to working with the same team again, hopefully in the future.”

Talking about the film, Lokesh Kanagaraj said, “While working with Thalapathy Vijay, I realized that he is a director’s actor. I was pleasantly surprised as I was excited to explore my creative liberty. The two big stars Thalapathy Vijay and Vijay Sethupathi coming together added to the scale of the movie. It was a great experience to work with them. I wanted this movie to have a mass appeal. When your work receives so much love and appreciation from the audience you automatically get inspired to make more movies to entertain them.”

Vijay The Master is a story of two powerful people, JD and Bhavani. The plot revolves around Bhavani, whose dark childhood phase in the juvenile detention centre makes him a ruthless gangster. To hide his misdeeds, he starts using the youngsters at the detention centre as scapegoats. On the other hand, JD is a personality development professor who is loved by his students but not so much by the management. Due to certain circumstances, he is forced to leave the college and work as a teacher at a juvenile centre. As days go by, events lead him to uncover a heinous plot set up by Bhavani. What follows is a thrilling battle to protect the juveniles and unmask Bhavani.