June 16, 2021: Adjunct professor of Prosthodontics and Implantology at the School of Dentistry, Amrita Vishwa Vidyapeetham, Dr Suresh Nayar, has become the first ever non- British to be elected as the President of the British Society of Prosthodontics (BSSPD) to help it achieve even greater heights in promoting excellence, training and research in prosthodontics.

The British Society of Prosthodontics (BSSPD) is one of the oldest of the specialist dental societies in the UK and was founded in 1953. The worldwide membership is around 500, and the society is always actively pursuing new members who have an interest in fixed, removable, implant or maxillofacial prosthodontics.

Speaking on the development, the newly appointed Dr Nayar said, “It is such an honour to have become the first non- British to be elected as the President of BSSPD. I look up to this new challenge and am excited to drive and deploy innovative ways to scale the highest standards of growth for the organisation. Organizations today are facing an urgent need to ‘rethink’ to accelerate transformation and maximize value in alignment with customer needs, organizational goals and unique market conditions. I look forward to working with the amazing team at BSSPD on the journey to reimagining prosthodontics, the smart way.”

Dr Suresh Nayar brings to BSSPD a rich experience in leading the global research and development in the field of prosthodontics as well as strategy and implementation of best practices. He founded the Head and Neck Cancer Support Society in 2018, the first of its kind in Canada and was awarded the Covenant Health Mission Award in 2016 & 2019 in the Social Justice category and for the Covenant Health Recognition Award in 2021. Currently, Dr. Nayar also serves as Director of Clinics, Institute for Reconstructive Sciences in Medicine (iRSM), Edmonton, Canada; Site Program Chief, Misericordia Community Hospital, Edmonton, Canada, and an Associate Professor, University of Alberta, Canada. He also chairs the Website and Social Media Committee on the American Academy of Maxillofacial Prosthetics Board (since 2019) and is the Hon. Web Editor of the European Prosthodontic Association (since 2008). He served as the Hon. Secretary of the British Society of Prosthodontics from 2009-12 and currently serves as the International Representative.

Born in Thiruvananthapuram, Dr Nayar graduated from Government Dental College in Calicut in Kerala, India in 1993, he completed his post-graduate degree (MDS) in Prosthodontics from Manipal University. His current research interest includes improving quality of life in head and neck cancer patients; use of digital technologies and additive manufacturing in advanced jaw reconstruction and maxillofacial prosthodontics; development of a virtual reality planning and educational software; use of AI in diagnosis of adverse tissue reaction around osseointegrated implants, among others. He is the director the advanced jaw reconstruction workshop at iRSM and chairs the ‘Oral and Dental Care clinical guideline review team’ for the Provincial Head and Neck Tumour Team of Alberta, Canada.

Amrita Institute of Medical Sciences (Amrita Hospital), based in Kochi, is one of the premier hospitals in South Asia. Founded in 1998 by Mata Amritanandamayi Devi (known worldwide as AMMA), it offers a full range of primary and specialty care medical services. AMMA’s vision of providing advanced medical care to the poor and disadvantaged was the inspiration for Amrita Hospital, which today is a 1100-bed (490 units) tertiary referral and teaching hospital, serving more than 10 lakh outpatients and more than 70,000 inpatients annually. 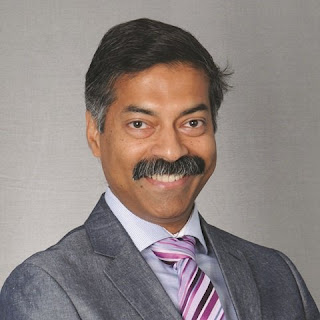 In 2015, South Asia's first ever Bilateral Hand Transplant Surgery was done at Amrita Hospital. The same year, Amrita Hospital won the British Medical Journal Award for the Best Surgical Team in South Asia. The Amrita team won the award for its two successful double hand transplants, the first and the second bilateral hand transplants in this region.