On the occasion of completing 02 years, Byloapp India has announced the launch of ‘Byloapp Business Awards’ to re 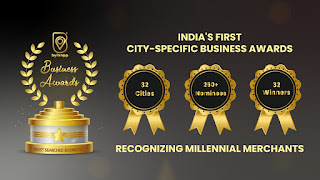 cognise millions of millennial-merchants of the Indian marketplace. These awards will help any merchant to establish a celebrity-like presence in their own city and the winners are powered by the customers community with the help of Byloapp.com.

According to a recent study, Indian-millennials comprise 400 million, accounting for one-third of the country's population and 46% of the workforce. Considering the last 10 years, the millennial & Get Z population is floating through the wave of getting influenced by reel-life celebrities resulting in their changed shopping behavior unknowingly affecting the survival of millennial-owned businesses.

With the launch of ‘Byloapp Business Awards', Byloapp India has become the first Indian startup to launch city-specific awards focusing on the merchants of the hyper-local marketplace. In just two weeks, Byloapp India has received more than 250 nominations from 32 cities, 08 different states and has reached across 87,000+ Indian audiences.

This initiative is being seen as a very important missing piece of the marketing puzzle from the merchant’s perspective as this is giving them an opportunity to reconnect with their customers after the pandemic. And, seeing such active participation and response to this initiative from the merchant's and customer’s community, Byloapp India’s Founder & CEO Mr. Rohit Verma announced that the “Byloapp Business Awards will be conducted on a monthly basis and very soon we will start a social talk show with the millennial-merchants followed by a city-specific marketplace magazine”

Winners were announced by Mr. Rohit Verma CEO & Founder of Byloapp through an award ceremony previewed on YouTube.

At the time of announcing the Byloapp Business Awards, the platform was available in 32 cities and at present, it is available in 38 cities with more than 10,000 businesses providing 50+ categories. Byloapp.com is becoming India’s biggest hyper-local marketplace search engine and aiming to double their presence in the next couple of months.