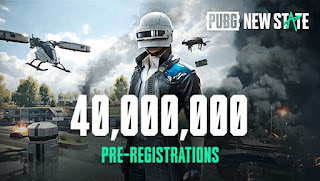 “We’ve been able to achieve this level of success because of fan enthusiasm globally and their belief in PUBG Studios work,” said Minkyu Park, Executive Producer of PUBG: NEW STATE. “We’re now focused on taking the valuable feedback we received during PUBG: NEW STATE’s Second Alpha Test and polishing the game before its official launch later this year. We are devoting all our resources to ensuring PUBG: NEW STATE meets the expectations of our fans, both in terms of entertainment and stability.”

* Android pre-registration does not include China or Vietnam

KRAFTON, Inc. is a collective of independent game development studios brought together to create innovative and engaging entertainment experiences for gamers across the world. The company consists of PUBG Studios, Bluehole Studio, Striking Distance Studios, RisingWings, and Dreamotion, each with its own unique expertise.

KRAFTON is responsible for premier entertainment properties including PUBG: BATTLEGROUNDS, PUBG: NEW STATE, The Callisto Protocol, TERA, and ELYON. As a technology-driven company that boasts world-class capabilities, KRAFTON seeks to expand its areas of business beyond games to multimedia entertainment and deep learning. For more information about KRAFTON, please visit https://www.krafton.com.