New Delhi, 26 October 2021 – The Minsters of Health of countries in WHO South-East Asia Region today committed to renew and accelerate efforts to end tuberculosis, in view of the pandemic disrupting services and leading to increase in TB cases in the already high-burden Region. 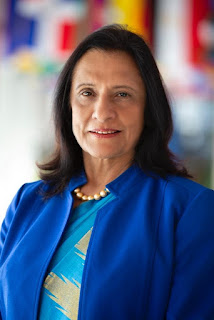 “Despite being a preventable and treatable, TB kills more than a million people every year, almost half of them in the WHO South East-Asia Region. We must intensify effort towards ending TB,” said Dr Tedros Adhanom, Director-General, WHO, addressing a High-Level Meeting for Renewed TB Response.

At the day-long meeting held virtually, the Ministers of Health signed on a ‘Ministerial Statement of Commitment’ unanimously committing to actualize and intensify essential interventions. The meeting was organized by ministries of health of India, Indonesia, and Nepal and WHO South-East Asia Regional Office.

The Ministers committed to multi-sectoral and whole of society approach to end TB with national programs led by the highest possible political level, and closely monitored for targets.

They agreed to increase budgetary and human resource allocations including upfront investments required to catch-up on lost ground during the COVID-19 pandemic. It is estimated that US$ 3 billion may be needed annually to implement comprehensive set of interventions required to end TB in the Region.

The Ministerial statement called for ensuring the highest attainable standards of rights-based, stigma-free, quality-assured and people-centric services. It emphasized that preventive, diagnostic, treatment, rehabilitative and palliative care, should be accessible to all including migrants, prisoners, children, the aged and other high-risk populations such as people with TB/HIV co-infections.

The statement called for increasing outreach of care by strengthening services at all possible health centers and use of innovative care and delivery approaches such as digital health and efficient use of technology to reach the unreached.

The Ministers of Health committed to mainstream social and financial protection along with TB care services. Poverty and undernutrition are among the biggest contributor to TB disease. Systematic provision of socioeconomic support, adapted to country context, to the patient and family are essential and more relevant in the COVID-19 era, the statement said.

It called for social support to TB patients and their families from the time of development of symptoms, to diagnosis till the successful treatment completion and in some case beyond treatment to address the sequelae, to achieve the goal of eliminating catastrophic financial losses.

The Ministerial statement emphasized on empowerment and engagement of community and civil society representatives in planning, monitoring, organizing and providing for such support to ensure a people-centered response.

The Regional Director said, “While we continue to work together to mobilize political and financial commitment, we will also continue to provide rapid and relevant guidance and technical assistance to all countries in the Region.”

“Together, let us renew and reinvigorate our commitment to End TB, for a fairer, healthier, more health-secure and sustainable Region and world for all,” Dr Khetrapal Singh said.

TB and WHO South-East Asia Region –

Despite being a preventable and curable disease, TB is the world’s top infectious killer.

The WHO South-East Asia Region, home to a quarter of the world's population, bears 43% of the global TB burden and one third of the global burden of drug resistant TB.

Hence, in 2017 Regional Director Dr Poonam Khetrapal Singh announced ‘Accelerated efforts to end TB’ as a regional flagship. At a high-level meeting, Ministers of Health and WHO adopted a ‘Call to Action’ committing to more resources and action to end the disease.

In 2018, the Region renewed its commitment to further intensify efforts and ensure rapid and concrete progress to end TB by 2030.

With concerted efforts and highest-level commitment, progress was being made to trace and treat the affected to curtail the TB epidemic. Notification of TB cases increased to ~3.6 million cases in 2019 from ~2.6 million cases in 2015. As a result, the total treatment coverage increased by about 30%. The treatment success rate among new drug-sensitive TB (DS-TB) patients increased from 79% among the 2014 cohort to 84% for the 2018 cohort. Bangladesh, Myanmar and Thailand were on track to achieve the 2020 End TB milestones for reduction in mortality while Myanmar was also on track to reach the milestone for reduction in incidence rate.

However, the pandemic reversed the progress by disrupting access to health services and exacerbating social factors like poverty and undernutrition. Over 4.3 million TB cases are estimated to have emerged in 2020 with the region accounting for 43% of all new TB cases globally.