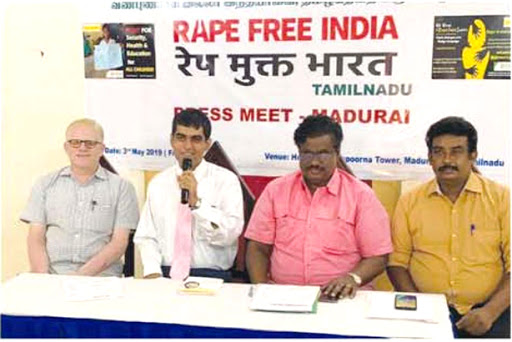 May10, 2019: As part of the ongoing month-old campaign 'Rape Free India', top leaders from DMK, INC, AIADMK and BJP in Tamil Nadu, namely Dhanush M Kumar from DMK, E.V.K.S. Elangovan from Indian National Congress in Tamil Nadu have signed a pledge to make India rape free by 2022. Till date, 19 candidates from Tamil Nadu have pledged for the safety of women and children to support the campaign. The campaign is collectively run by Kailash Satyarthi Children's Foundation and NEEDS in Tamil Nadu.

Apart from Tamil Nadu, top leaders from BJP, INC, AAP, TDP, JDU amongst others have joined hands with the Kailash Satyarthi Children's Foundation to pledge for a 'Rape Free India'. The ongoing campaign which aims to prioritise safety of children and women in the election agenda has witnessed commitment from over 292 Lok Sabha candidates in less than 25 days.

The Kailash Satyarthi Children's Foundation (KSCF), set up by Nobel Peace Laureate, Mr. Kailash Satyarthi, is a global thought leader for prevention of exploitation and violence against children. KSCF works for the creation of a child-friendly world through direct interventions and programmes, research and capacity building, and campaigns for the mobilization of mass support and behaviour change. Mr. Satyarthi's lessons learned guide the Foundation's work to engage children and youth as part of the solution, build greater collaboration between governments, business and communities, ensure effective national and international laws, scale know-how and successful practice and create partnerships with key stakeholders.