&TV || For Nehha Pendse, playing comedy is no laughing matter!

Nehha Pendse has been entertaining the viewers with her portrayal of ‘Anita Bhabi’ in &TV’s ‘Bhabiji Ghar Par Hai’. Although Comedy is not new to Nehha, being wooed 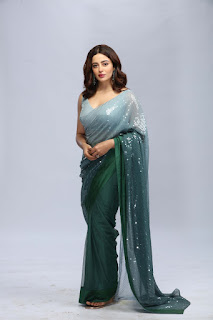 by her friendly neighbour, Manmohan Tiwari aka Rohitashv Gour is definitely a unique experience! In a candid conversation, Nehha reveals her love for the comedy genre and how she was selected to play ‘Anita Bhabi’. “The comedy genre is fun but not that easy. Although I have done Comedy before, this experience is new to me. Striking a chord with the audience with your comic timing and quirks is crucial. But I thoroughly enjoy Comedy as it eases out your stress. I do not consider myself a funny person, and neither doing Comedy came naturally to me. But over time and after hours of practice, I can confidently say that I have learnt the trick of the trade. In particular, AnitaBhabi’s character is hugely popular, and the viewers have a certain mindset towards it. Therefore, I am trying to define my own space and create my own identity. All I request my viewers is give me a fair chance and see Anita from a completely new lense. While the character nuisances continue to be the same but there is some freshness to it. The entire story plot is written, directed, and executed with such finesse, and each character is iconic and has etched a special place in the viewers’ hearts. The success of the show itself speaks volumes of the efforts and hard work. I do consider myself blessed to be chosen to be a part of this cult show. Talking about her previous body of work, the Marathi Mulgi said, “Nothing ever came easily to me. I have always worked hard for it and will continue doing so. While acting may come naturally to many, I believe acting is an art that only gets better with time and practice. Irrespective of the genre, I strongly believe that making someone laugh or cry profusely is not a cakewalk. A lot of effort goes into bringing out the right emotion. So, I always try my best to feel the emotion first and then emote it in front of the camera. This practice helps me connect well with my audience.” Ending on a positive note, Nehha says, “I hope I do justice to the role of Anita Bhabi and live up to everyone’s expectations.”