Why Only Rasoda? The entire nation asked this question after Sony SAB released the track ‘Khol Dimaag Ka Shutter’ ahead of Kaatelal & Sons' launch. The underlying message of the show was clear – Dreams Know No Gender. Proving this right is a 17-year old Rishitaa Jain who broke the gender stereotypes to make our country proud by clinching won four gold medals at the age of 16 for India in the Commonwealth Powerlifting Championship in 2019 held in Canada. 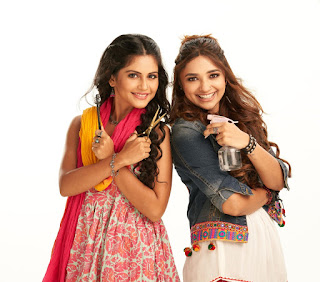 Rishitaa’s journey has just begun and while she is bound to scale greater heights in her career, she teaches us one very important thing - dreams have no control, theyknow no boundaries or limits. Then why do we often define our dreams by the gender of the person?

Inspired by a real story, Sony SAB’s Kaatelal & Sons, is a story of Garima and Susheela played by Megha Chakraborty and Jiya Shankar respectively who take on their father’s business of running a local men’s hair salon in Rohtak when adversity strikesdespite their father believing that his ancestral shop, aptly named ‘Kaatelal &Sons’, cannot be passed on to his daughters since girls are not meant to pursue such a profession.

While Megha and Jiya are aiming to inspire the audience with ‘Sapno Ka Koi Gender Nahi Hota’ message in reel life, Rishitaa has set a tremendous example in real life. Congratulating this young talent and her exceptional victory in a field which is perceived to be a male-dominated sport, Megha Chakraborty and Jiya Shankar from Sony SAB’s Kaatelal & Sons have a special message for Rishitaa.

Megha Chakraborty congratulating Rishitaa Jain on her path breaking victory, said, “This win is a moment of pride for all the girls and women out there. There is nothing that women cannot accomplish, and I am a strong believer that you can accomplish it if you set your mind on something. There are still such set notions about gender based roles mainly about what women should or should not do. Our show Kaatelal & Sons which stands strongly on defeating gender stereotypes and un-gendering your dreams is a true testament for Rishitaa’s victory. While we are bringing forth a story about Garima and Susheela’s journey of un-gendering their dreams and wishes, Rishitaa has accomplished it in reality and I am immensely proud of this accomplishment. She is a true example for all the women and I congratulate her on this remarkabletriumph.

Jiya Shankar, stoked about Rishitaa’s phenomenal accomplishment, expressed, “I would like to congratulate Rishitaa for everything she has achieved so far . This win is the perfect example of following your dreams and passion without giving in to our society's set notions towards gender roles. Rishitaa truly personified the message of– Ungender your dreams. In some ways, Rishitaa’s passion is like my screen role of Susheela. She is tough and strong and she would strive hard to make her dreams come true. Not only has she conquered a male-dominated sport like powerlifting, but she has also proved the fact that dreams and passion have no constraints. More power to you girl and I wish her all the very best for her future wins.”