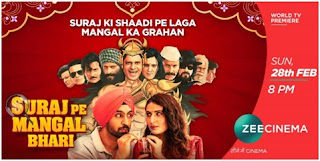 The story begins with Madhu Mangal Rane (Manoj Bajpayee) who has become a self-proclaimed wedding detective after his lady love (Neha Pendse) is married off to a person who is obsessed with perfection in everything. Scared by his experience, Madhu Mangal Rane takes an oath of exposing the bad habits of prospective grooms, so that no girl gets married to an unsuitable man. The entertainment quotient jumps a notch higher when Madhu Mangal Rane crosses path with Suraj (Diljit Dosanjh).

Talking about the film, Manoj Bajpayee shared, “I really enjoyed playing the character of Detective Madhu Mangal Rane. I read the script and I immediately wanted to be a part of the story. While this was a new kind of a role for me to experiment with, I was confident about it as Abhishek always has a very clear vision with his films. The project was full of learning and my character pushed me beyond my comfort zone as an actor. I love these challenges and they really help me grow. The light-hearted story will show the audiences characters and situations that are immersed with situational comedy and drama, making the plot all the more interesting.”

The story takes off when Suraj who is looking for a bride starts to get suspiciously rejected by the potential bride’s families. The story accelerates when he realises that it’s the detective Madhu Mangal Rane who is creating this havoc in his life and starts to plot against him. Thus, begins the mad events of outrunning each other's tricks. This comical nok-jhok between Suraj and Mangal is brilliantly honed by Manoj Bajpayee and Diljit Dosanjh.