Indore, February, 2021: PR 24x7 is one of leading public relations agency in India; on the occasion of it Fifteenth Foundation day today announced sharing its profit margin with company’s dedicated employees. The company has given a very unique gift to its members under which the company has allocated 20% of its profit to its members. There are only a few companies who treat their employees like family members and PR 24x7 completely abides by it. 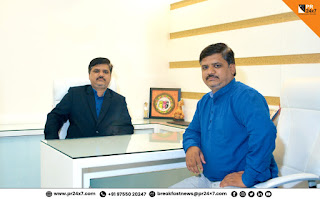 It is a firm fact that unless the members of a family don’t walk shoulder to shoulder they can’t get along well same replicates in the company as well, unless the employees do not contribute indelibly in advancing it the company will not grow rationally. In such a situation it is also the duty of the company not to let the dedication of its members go in vain. . The company's name rises to a higher status when it is committed to share part of its profits with members who are no longer directly or indirectly part of the company. But the company has not forgotten his work till date and considers him a part of his family even after being away. This specialty distinguishes it from the crowd and ranks as one of the leading companies of the country.

On the occasion of companies 15th Foundation Day Mr Atul Malikram, Founder PR 24x7 said; “Going back the memory lane in the past 15-years, the company has never treated its members like employees or even called them by addressing them by this term. The company addresses them only as its members and to stand by the commitment our members have shown in the past so many years the company is investing its 20% of its profit in the name of the members who have been with the company for over five years. This will be implemented for the life of the members from the beginning of the business year i.e. from 1 April 2021.”

Moving on the footsteps of philanthropy and generosity, the company always moves in the direction of something new for its members. Some companies believe in establishing their name as a brand. While some companies prioritize the functions of their members. Keeping the promise alive and setting an example of this, PR 24x7 has listed the members who will be a part of this profit sharing module and will take the company forward.