&TV’s Santoshi Maa Sunaye Vrat Kathayein has time and again caught the attention of its viewers and is yet again set to showcase another dramatic and shocking incident. In the curious case of Babli’s mystery 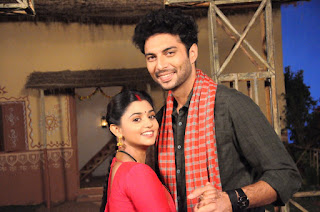 murderer, Indresh (Ashish Kadian) surrenders himself to save Swati (Tanvi Dogra), but how many more such sacrifices must he make for his loved one? Devesh Tripathi (Dhiraj Rai) who is still under the evil influence of Asur Rani Paulomi (Sara Khan) captures Indresh putting his life at stake and blackmails Swati into marrying him. In order to protect his wife, the brave Indresh grabs a gun and shoots himself leaving everyone stunned. Santoshi Maa (Gracy Singh) has never failed her devoted bhakt Swati, but how will she console her in the time of such a great loss? Sharing their experiences with a twisted fate, the pair shares, “No one could ever image Indresh and Swati getting separated like this. The number of challenges that they have faced and conquered together is commendable and a true testimony to their undying love. Losing Indresh will be a tough loss for Swati, so much that she attempts to jump into the burning pyre of her husband’s last rituals. But this sadness will drive her to avenge him and find out who killed Babli.” Says Tanvi Dogra (Swati). Ashish Kadian (Indresh) says, “Indresh is someone who will go to great lengths for Swati’s safety and happiness. When Swati is in a position of distress, he will always put her first before anything, which means even his own life. Indresh is committed to Swati until the very end, it is a tragic scene when he shoots himself and Swati witnesses this mishap over a videocall. She will be in utter dismay and only with Santoshi Maa’s help and her memory of Indresh will she have to fight through this loss.”